End of the Year Road Trip 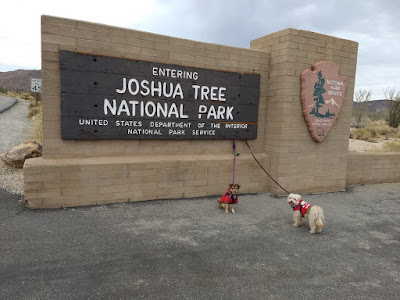 After working furiously for the last days of December, we took off for the long waited road trip. We made our first major stop at Joshua Tree National Park.  We were a little surprised to find that dogs were not allowed on any trail other than the parking lots and campgrounds.  We took a few photos near the entrance then spent a night at the Chiriaco Summit Dry Camp, which is a free campground just one freeway exit away from the south entrance of Joshua Tree National Park. 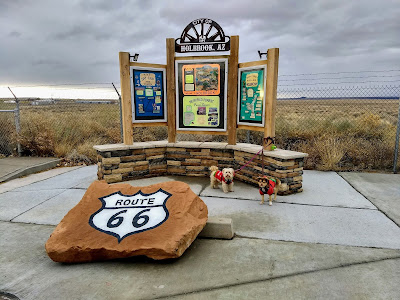 As we drove across the border to Arizona. I noticed the landscape on both sides of the highway were a lot like Joshua Tree. Many of the plants were the same.  We arrived Holbrook, which is the nearest town to Petrified Forest National Park. Unlike Joshua Tree, dogs are allowed everywhere in Petrified Forest except inside of buildings. However, the park is closed one day a year on Christmas Day. We arrived in the afternoon of December 24, so we decided to spend two nights in Holbrook.  Luckily, it only costed $35 per night at the Motel 6.  On December 26, we arrived at Petrified Forest early in the morning, so we could spend an entire day there.  We really enjoyed checking out the sights, taking pictures, and hiking through the trails. I will have to thank the friend who highly recommended this national park. 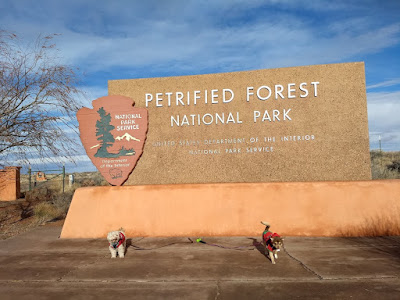 By the time we went through all the points of the interest in Petrified Forest, it was in the evening. We didn't want to spend a third night in Holbrook, so we looked for another nearby city and ended up in Winslow because it was only $30 plus $10 pet fee to stay at Econo Lodge.  It was a big room with 2 queen sized beds, microwave, mini fridge, hair dryer, and a full bathtub.  Breakfast was also included. What a deal!  This is another reason I prefer to travel through small towns.  We didn't encounter much traffic once we left California, and accommodation costed a lot less.

After we settled into our room, I Googled Winslow and was surprised to read about its number one attraction - Standin on the Corner Park.  Two of the Rock 'n Roll legends passed away in January 2016.  First it was David Bowie and then 8 days later, Glenn Frey. I never forget that month and where I was when I found out Glenn Frey passed away. The song Take It Easy, placed Winslow on the Rock 'n Roll map. It made sense now the hotel room key card has "Take It Easy" printed on it. After leaving the hotel next morning, we drove down the street to the Corner. Many people were there taking photos already.  We took several photos of our own. 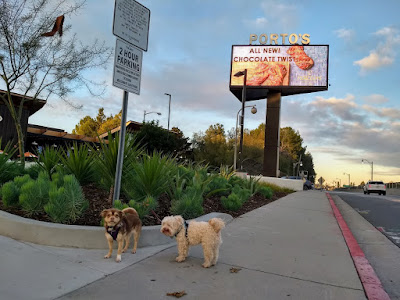 We headed back to California after departing Winslow, but we were not ready to go home yet.  For more than 2 years, I have wanted to visit Porto's Bakery. It didn't matter which Porto's location.  It would take about 8 hours to get to Porto's West Covina location from Winslow.  As we drove through Flagstaff, the snow came down hard even though it was sunny, so we had to take a break.  We took another extended break in Needles for a nap.  We left Needles around 2 am so that we could arrive at Porto's West Covina around the time they open the shop at 6:30.   We arrived around 7 am, and people were already picking up their cakes and pastries. The bakery did not disappoint me. The architecture of the building is beautiful. The staff was efficient, and the pastries were amazing.   We could take a trip down Southern California just for a Porto's tour since they have 5 locations and possibly 1 more in the near future.

We also visited a friend and some relatives before returning home on December 30. I did want to be on the road on New Years Eve.  We were all happy to be home.  Now we can plan our next road trip. Happy 2020, everyone!
Posted by Gaara at 7:00 PM No comments: