A Sore Throat Elixir that Works! 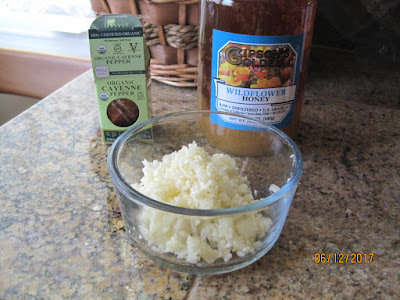 Earlier this month I had a cold. It started with coughing and then runny nose and then a severe sore throat.  I think in the past, it normally started with a sore throat when I was catching a cold. Lately it's always been the cough first.  Very often the cough would just go away after a couple days but not this time. My voice became hoarse after I started coughing for 3 days. When the sore throat kicked in, I had to take my first sick day at my new job.  By this time, I had already squeezed 4 fresh lemons for making hot turmeric lemon tea and drank it for several days. That was one of the home remedies someone gave me. It might have kept me hydrated but certainly didn't cure the cough.  As I laid in my bed, I figured there had to be other home remedies I could try. There had to be something that would actually work.

I stumbled upon a youtube video of a woman making a raw garlic, cayenne pepper, and honey elixir to cure her sore throat. I also watched a woman who swallowed a tablespoon of pure honey, and a few other video clips which all claimed they would work. I have tried the pure honey method in the past. It didn't cure my sore throat. After watching a few more videos, I wanted to see the raw garlic video again but could not find it.  I started to Google the internet for any reference of that remedy and found an article on Dr. Christopher's Herbal Legacy. I remembered that woman in the youtube video saying that Dr. Christopher was the person who she learned the remedy from.  At this time I had taken extra strength Tylenol for several days. I also took some cough syrup.  I figured that I had nothing lose to try this safe home remedy.  I quickly walked to the grocery across the street in my pajama to get the ingredients I needed and made the elixir.  Below is the formula:

Those are the proportions, but you’ll need more than that, so take four tablespoons of honey, one teaspoon of cayenne pepper and sixteen pressed cloves of garlic, and mix that all together.  Take ½ teaspoon to one teaspoon of the formula every 30-60 minutes.
Don’t wash it down - let the honey coat the throat.

I do not have a garlic press, so I just minced all 16 cloves of garlic with a knife. I swallowed this elixir every 30 minutes until the whole thing was gone. I felt the heat in my face and inside of my ears after swallowing the garlic and cayenne pepper; however, it was not unbearable due to the sweetness of honey.  It felt like something was actually working with the burning sensation.  Before I finished it all, my throat no longer hurt. It actually worked like a miracle just like the article says. I was very excited. Now knowing this magic potion, I shall not suffer from sore throat anymore. 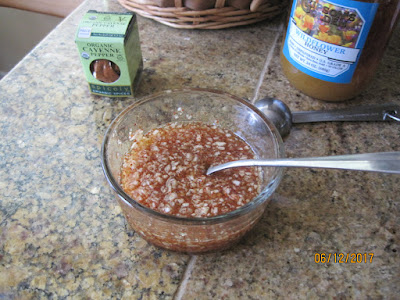