I have a new "Free" site that I used.  Craigslist.org used to be my "free" site, but in the past year Nextdoor.com has become my favorite free site. Now I only pick up free stuff from my own neighborhood and very often I just walk over to pick them up.  This morning I walked the dogs to a house not too far away pick up some free Calandrinia grandiflora cuttings.  I have seen these flowers in the neighborhood and thought they were really pretty, so I was very excited to get some free cuttings. A few hours later, someone else nearby posted "free lemon and lime tree (see photo above)". Initially, I was going to pass, then I thought how I have wanted a lime tree for many years.  I Googled how to tell a lemon from a lime tree, and decided to swing by the trees with the car. I smelled both trees, but I really could not tell the difference, so I just had to pick the one with smaller leaves (the one on the right) and hope that is a lime tree. I already have unlimited access to free lemons, so it would be a waste of effort if I had picked the wrong one.

Initially I was going to plant the lime tree in a planter, but I decided it would be best to plant it in the garden. I have always thought the big jade plant was wasting a prime spot in the garden. It's not particularly pretty, and it doesn't produce anything useful.  A couple weeks ago, the 13-year-old girl next door even said that jade tree is kinda ugly, and that I should get rid of it and plant something else!  I just started cutting down the jade plant with my Pocket Boy.  It didn't take long for me to get to the roots. I dug up as much roots as I possibly could.  My arms were shaking as I finished prepping for the planting location. 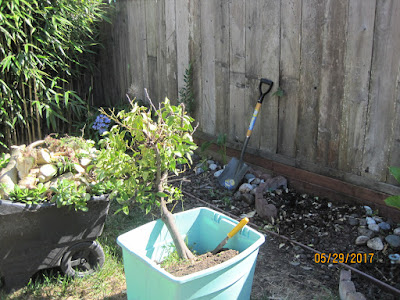 Before I put the lime tree into its place, I clipped off some branches that didn't look too good. They were covered in scale pests. I also removed some soil around the roots.  As I placed it in the hole on the ground, I mixed in some compost and covered it all up with soil before watering the tree really well.  It looked a bit dry.


It took over 2 hours to complete this project. The weather got warm as I worked the soil and dug up the river rocks and the roots.  I was pleased how good the new tree looks in its new home. It already has several buds and possibly baby limes. It would be so cool to pick limes from my own garden. I guess I will find out soon enough. 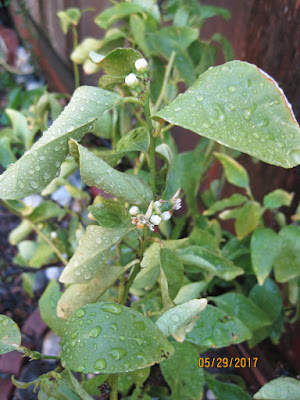