In early May, I received a doggie daycare request for a tiny Maltese puppy named Momo.  Momo means peach in Japanese. As soon as I saw the name, I knew there was some kind of Japanese connection. Momo's entire family came to the dog park to meet Cracus and me.  I learned that Cracus behaves better when he meets other dogs on mutual ground first. However, when I saw how small Momo was, I was a bit concerned.  Cracus is usually a bit rough and plays like a boy with whoever plays the same way.  He often plays with dogs who are either a little bigger or much bigger than he is. Momo looked like a little gentle girl. She rolled on her back with her belly exposed as soon as Cracus approached her.  I was worried that Cracus would be too rough. He also tends to grunt a lot when he is excited or just playing. Momo's mom, who is Japanese, didn't seem too concerned. Momo's dad, who has an European accent, was amused with the way Cracus walked on his hind legs. They were excited to talk to me about dogs since Momo is their first dog. Shortly after their visit, they confirmed Momo's daycare for the month of June. To my surprise, Momo plays just as wild as Cracus. Even though she is small, she is fast, fearless, and has even more energy than Cracus! I realized that Cracus has met his match on the first day Momo spent with us. Here is a short video clip of how crazy they played with each other! 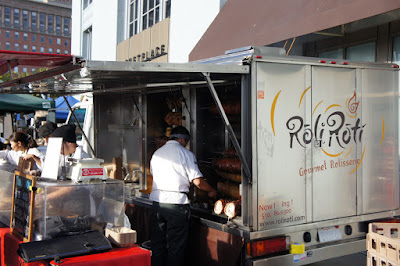 Momo's dad has been dropping off and picking up Momo everyday.  One day he mentioned how Off the Grid was holding up the traffic so he couldn't pick up Momo sooner. We started chatting about how expensive food trucks are selling their food. It's almost as much as going to a restaurant. He asked me if I have heard of Roli Roti. Yes, of course!  I used to see Roli Roti all the time at farmers' markets!  He was pleased that I knew of his food truck. It has been a while since I visited a farmers' market but how can anyone forget the sight of a truck full of rotisserie chickens?  I remember how good it smelled. I was stoked to learn that Momo's dad is the owner of Roli Roti! Wow, suddenly I felt that I have met a celebrity! 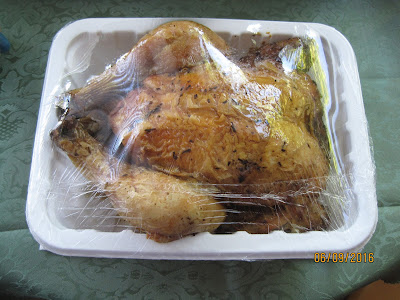 Needless to say, he is a busy man. Momo ended up staying with us overnight a few times. He was going to pay me extra for all the late pickups and overnight stay, but I was more interested in tasting Roli Roti again after all these years. He brought me a chicken last week.  Tonight he brought me a big chunk of porchetta.  It suddenly felt like Thanksgiving. After taking a few photos, I cut off 1/3 of it to give to my next door neighbors. They have been mowing my front lawn ever since we moved in and helped us with all kinds of repairs. I will be sure to share any goodies with them. Tomorrow I will bring another 1/3 of it to my parents. There is still a lot of porchetta after cutting 2/3 off. I wonder if I could freeze some for later? 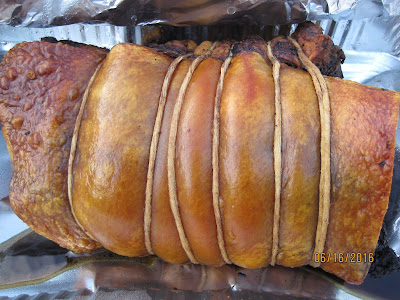