For years I have heard of Albany Bulb as the other awesome dog park that is comparable to Point Isabel, where I am a regular for the last seven years.   I didn't really think any other dog park would be as great as Point Isabel, so I never drove the extra two miles to check out Albany Bulb. Since foxtails have been quite a problem at Pt. Isabel this summer, I have not been going there as much. Last Saturday, while 4 other dogs were under my care, I wanted to take the whole pack somewhere fun.  My little helper from next door volunteered to hang out with us for the day, which made it easier to pack up the car with all six dogs for an adventure.

We arrived Albany Bulb around 10 a.m. on Saturday. We had to park all the way at the end of the trail leading to the beach. It was a little difficult for Kelsey who is now about 14 years old.  For her size, she is equivalent to a person in late 80 to 90 years old. When we finally got to the beach, we were all excited. I had no idea that Albany Bulb is a sandy beach that you can walk into the ocean.  Since it was on a Saturday, it was very crowded. We stayed for only about 45 minutes.


I took Cracus and Kelsey back to Albany Bulb on Monday morning, and we were able to park very close to the beach entrance. There were only a handful of people and dogs at the beach, so everyone had a lot of room to roam. Kelsey enjoyed dipping her paws in the bay while Cracus ran back and forth near the water. Kelsey even attempted to chase a ball next to a young hound. This time I brought fresh water with me, which proved to be a good idea as both Cracus and Kelsey got really thirsty.

We have found our new favorite dog park! 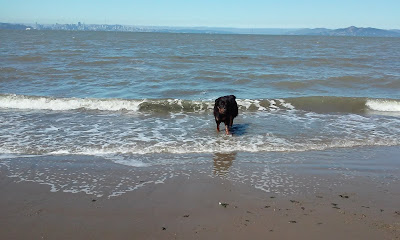