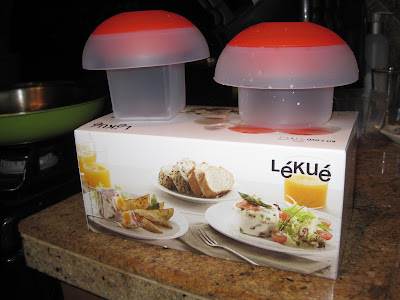 Last week one of my new colleagues gave me a set of Lékué egg cookers as a holiday gift.  They are just the cutest things. If you have been following my blog, you know that I love mushrooms and anything mushroom shaped. I have only been at my new job since end of August this year, so I was just amazed how she picked this gift for me.

Today I finally got the time to try it out. I brushed inside of the cooker with olive oil and lined it with some baby spinach. I put a couple grilled shishito peppers in there just because I grilled a bunch last night. Now about these shishito peppers, according to Wikipedia, about one of ten peppers is spicy. Last night I had them for the first time, and the first one I ate set my face on fire. I was very surprised and wasn't sure if I could eat another one.  Fortunately, the next 2 peppers weren't as spicy, but I would say one out of five is spicy for the batch of peppers I got. They are very good though, so I couldn't stop eating them. I think my tolerance for hot peppers just went up a notch last night. 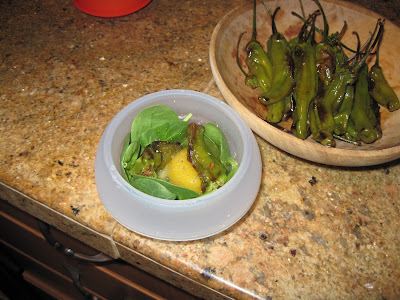 I sprinkled a little salt and pepper and put the lid back on. It was cooked in microwave for about 50 seconds, then I heard it popped. I guess the egg popped.  Luckily it didn't make an explosive mess in there because it had a lid.  The egg was fully cooked after 50 seconds.  Next time I will try 40 seconds for a softer egg. This is a great way to cook an egg with other vegetables or meats. I am going to pick up some gorgonzola cheese and mushrooms later for more experiments. 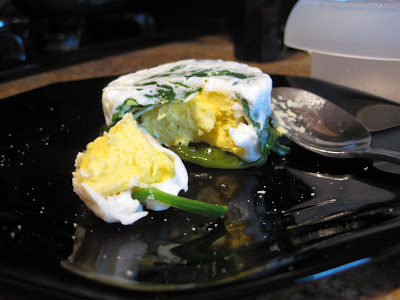