I had plenty of warnings from New Zealanders about the state of Christchurch before arriving its city center on Monday, July 14th. The city is covered in orange cones and construction fences. Many buildings and businesses are boarded up and clearly unoccupied. It feels more or less like a ghost town. The Cathedral used to be a gathering place for the local people, and now it's a broken empty shell. Many streets are closed off due to constructions.


Down the street from the cathedral is Canterbury Museum, which appears to be undamaged from the earthquake, is open to the public free of admission. One of its exhibitions is Quake City, which is a "multi-media attraction designed to inform, engage and educate locals and visitors to Canterbury about the seismic events that have occured since 4 September 2010." I spent most of my time in the museum looking at the videos and photographs of the damages the quakes had done to the city. Having experienced 1989 San Francisco earthquake myself, I felt very emotional looking at the photographs. It made me upset when some young children running around in the exhibition as if it was a lighthearted playground. 185 people were killed during the quake, I think the parents should either take this opportunity to educate their children or not taking them to this part of the exhibition.


While I was at Lake Tekapo a couple days ago, I chatted with a older man at Tekapo Springs counter. I asked him how long he's been living in that area. He told me that he moved there a couple years ago after losing everything in Christchurch during the earthquakes. He said that he can't possible stay in Christchurch because it simply upset him too much. People who have experienced earthquakes in such multitude simply will never forget it. I still remember 1989 earthquake vividly.  I hope when I come back to Christchurch next time, it will be much different. 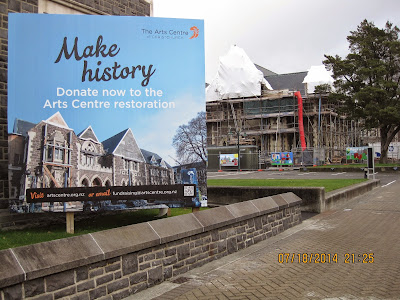