What I Learned at Million Dog March 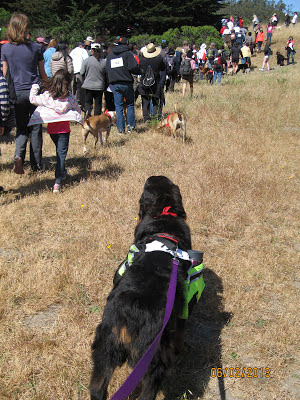 A few days ago I found out that Million Dog March was going to take place today in San Francisco at McLaren Park. I thought it would be fun to participate, so this morning I got up at 6 a.m. and arrived at the park around 8:30. It was nice to get up early and drive over to San Francisco without its usual traffic.  McLaren Park is the second largest park in San Francisco (Golden Gate Park is the largest), but many people who came for the March today had no idea this place existed including myself!

Once the March started at 9 A.M., it took quite a while for the crowd to get moving. A few dogs got snippy with each other. Fortunately I never have to worry about Kelsey even when other dogs snap at her sometimes. She would just back off and not let anything bother her. Most of the sponsors for the event had booths setup at the parking lot. Kelsey got a red Yelp bandana that says "The Original Yelper" on it. As usual, many people commented Kelsey for carrying her own stuff. 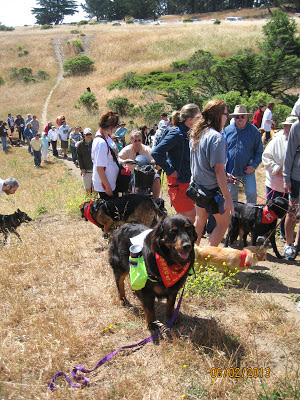 While marching along the route, we came upon a large oak tree that has a few interesting displays on it including the one shown below. I am not sure whether it's a joke of some sort as you can clearly see the "squirrels" in the clear box are not real preserved squirrels.  The text reads "Sammy & Shirley 1926-1932 died from starvation during the great depression. Preservation performed by taxidermist July 1932". Everyone was amused by the displays on the tree. 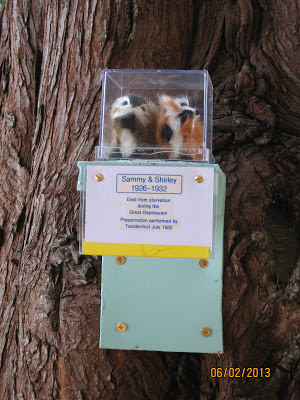 After the March, there was a post-march festival with the event sponsors and other vendors. There was a live band as well. Everyone was checking out everyone's dogs. A young woman was quite taken by Kelsey. She told me that Kelsey looks just like her dog who recent passed away, and she told me her dog was a Hovawart. I told her everyone thought Kelsey was a mixed breed of Rottweiler and something else. She spelled out Hovawart and told me to look it up because that's what Kelsey looks like. I was surprised as I look at pictures of Hovawart, which means "an estate guard dog" and read its characteristics. Kelsey definitely matches most of the descriptions including getting along with non-canine pets in the household. It's an ancient German breed that's rare in the States, so people usually assume it's a mixed breed. I have seen many dogs including working at UC Davis Vet Med Hospital, but I had never heard of or seen a Hovawart before.