Daylight saving time started this morning, so we lost an hour.  I could be working in the garden, but the weather was nice so I decided to take another day trip instead. Today was also the first Sunday of San Francisco Sunday Streets 2013. According to its website, "Sunday Streets are events that encourage recreation, community activities and fun in San Francisco. Sunday Streets closes stretches of city streets to automobile traffic, and opens them to people for several hours on a various Sundays throughout the year, so participants can enjoy a large, temporary, public space where they can bike, walk, run, dance, do yoga, or do any other physical activity. Non-profit and health organizations offer free activities and share information about their services during the event."


I have heard of these events in past years but have never checked it out.  Since I woke up early this morning, I decided to put Kelsey's backpacks, a.k.a. service dog costume, on her again and take her for a BART ride.  After taking Kelsey on the ferry last October, I was sure Kelsey would do just fine on BART. Kelsey entered and exited BART gates with me, got on and off the escalators and elevators with little confusion.  I could see that she just watched my feet and followed.

Embarcadeo was quite nice without the usual weekend traffic. We took a long walk down the pier. Normally I would go shopping in the Ferry Building, but I didn't want to push my luck and drag Kelsey in there, too.

On Sunday, January 6, 2013, San Francisco began charging for Sunday parking. Ever since that took place, I have stopped driving to the city on Sundays. Some people have been upset with getting parking tickets on Sunday. I hope with Sunday Streets, people can just leave their cars at home for at least a day. 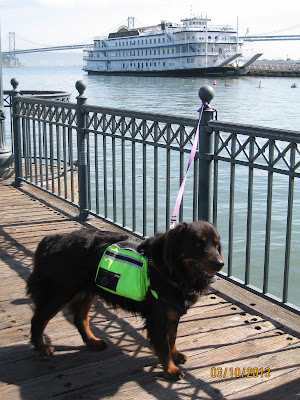