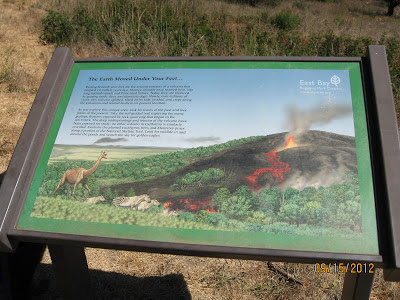 Last month I went to Robert Sibley Volcanic Preserve for a hike and got a little lost while trying to take a shortcut. It ended up to be an almost 6-hour hike. Both Kelsey and I were exhausted when we finally made our way back to the car. Now more than a month has gone by, and I decided to go back and check out other trails. I picked up a few things at Berkeley Bowl and headed over to the hills around 10 a.m. 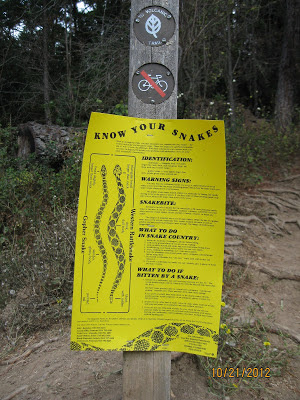 Today I went toward the opposite side of the preserve. The weather was perfect for a hike since there was very little shade on these trails. Kelsey and I entered the cattle grazing area. We did not see any cattle, only cow pies. There were huge piles of cow pies at the end of the trail on the other side of the second cattle gate. The open space was as far as the eyes could see. I didn't know how far it would go. Base on last month's experience, we just turned back at some point.


What I did see was a gopher snake. At first I wasn't sure whether it was alive because it was motionless. Kelsey almost stepped on it but I called her to the other side. As I got closer to the snake, it moved forward a little.

We encountered many kids on the way back. They were all very excited at seeing a dog with backpacks. One said that Kelsey was wearing "a purse".  It was a great hike under the blue sky with many friendly dogs on the trail. I think we will go back there soon.