I promised Kelsey that I'd take her somewhere for a day trip during my week off from work. I have been flipping through The Dog Lover's Companion to the San Francisco Bay Area to see where would be fun to take her for a day excursion. I found out that well behaved dogs are allowed on Blue & Gold Ferry but not from Oakland and Vallejo.  My options were either Tiburon or Sausalito. I have taken the ferry from Tiburon several time in the past, so I decided to go to Sausalito. The book also highly recommends Remington Dog Park, which is just down the street from Sausalito Ferry Station.

I stopped by the park first. It's a big fenced park that allows dogs to roam freely. The ground is mostly covered with thick mulch. It's well kept with plenty of shady areas and picnic tables although food is not allowed in the park. It's a great park for dogs who like to play together and their people to socialize. Kelsey on the other hand just sniffed a few dogs and walked around, and she was done.


I drove down to Downtown Sausalito where the ferry dock is. The first parking lot adjacent to the ferry station costs $3 an hour to park. If you go down to the next further parking lot down the street, it's $2 an hour. If you go even further to parking lot 4, it's $1 an hour. All of these parking lots are on the same side of the street next to the water. Basically, the further you are willing to walk, the cheaper it gets. I circled around a couple times before figuring this out and ended up parking in lot 4. It's still just 5 minutes walking down to the ferry dock.

When I arrived the dock, I was so excited, I just purchased my round trip ticket to San Francisco through the vending machine and then I realized that I had made a mistake. I have bought a ticket for Golden Gate Ferry not Blue & Gold! I started to panic. What if they wouldn't let me take Kelsey on board? I just spent $20 on the ticket!  I walked over to the information booth to find out what the animal policy is for Golden Gate Ferry. The man in the booth looked at Kelsey and asked, "Is she a service dog?" I told him that she could be with hesitation. The man said, "Of course she is. She's wearing a backpack." And of course Kelsey was sitting next to me in the most perfect pose.  The man pointed to the deckhand who just got off from the ferry and told me to go ask her if service dogs are okay. 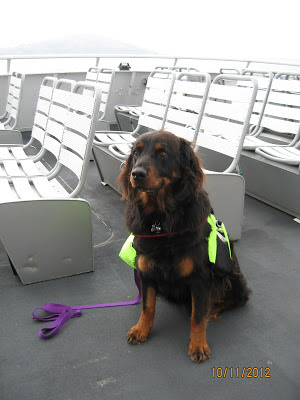 Well, I knew that service dogs can pretty much go anywhere and no proof is ever needed. So not only I got on board, I was the first person to go on board with my "service dog."  In fact she was wearing a backpack to serve me. Kelsey just quietly sat next to me during the entire time on the ferry. Occasionally she'd look up and perk up her ears at loud noises. Several people and kids came and petted Kelsey with admiration. Many people simply greeted Kelsey with a smile. I guess she looked like she was working hard.

We took a walk around the ferry building before getting on the ferry again to return to Sausalito. Well, I guess if I ever wanted to take Kelsey on BART, I just need to dress her in her backpack and harness. 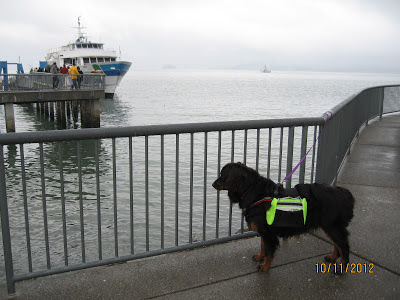