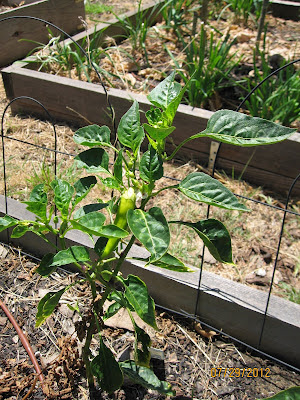 Months ago I planted an assortment of peppers - red, orange,  green, and yellow bell peppers plus some sweet banana peppers. For months they didn't seem to be growing at all and looked as if they were dying. I shifted my focus to the passion fruits and beans, and all of a sudden I found peppers flowers blooming and peppers growing. I love this kind of surprise! It's like discovering treasures in the soil. 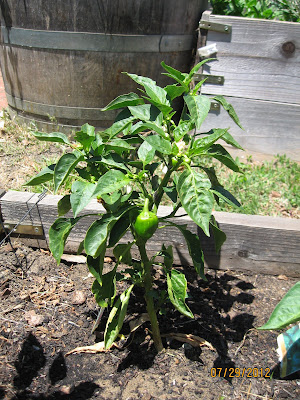 Historically, my peppers never got big, and it's the same with eggplants.  Perhaps I need to add more compost to the soil. This year even my tomatoes stay small. Fortunately, I am also growing gooseberries, and they are doing extremely well with lots of flowers. Please Check back for an update on the gooseberry plants! 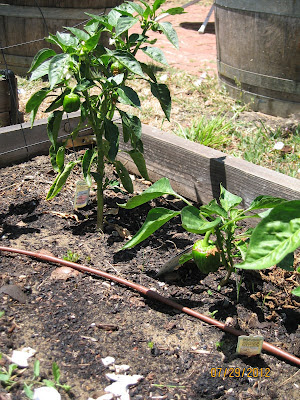 Yesterday I picked up a free book from a pile of garage sale leftover. It's called The Dog Lover's Companion to the San Francisco Bay Area. I flipped through the book and found Sobrante Ridge Regional Preserve as the highest rated dog park in Contra Costa County. I thought Wildcat Canyon was really great. Can Sorante actually surpass Wildcat Canyon? I had to check it out for myself. 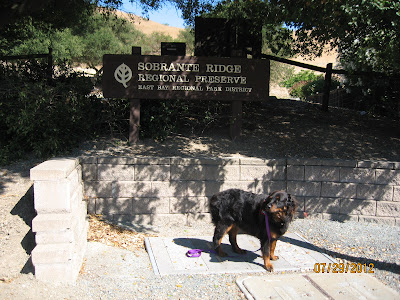 This morning I packed up my regular hiking gear along with another jar of peachy smoothie and hit the road with Kelsey in the back. El Sorante isn't far from El Cerrito, but as I drove down San Pable Dam Road, I had the feeling of going back in time. I was hoping the weather would stay overcast since I consider that as the most ideal weather for hiking. Unfortunately, the sun came out shortly before 10 A.M. as I arrived Sobrante Ridge. I was surprised to find a completely empty parking lot and empty park. 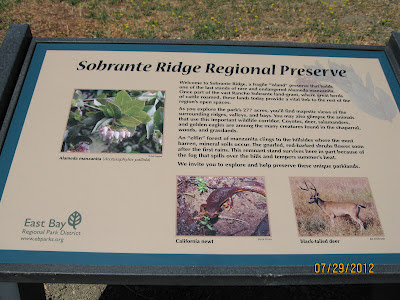 We saw a lot of lizards as we hiked up the hill. The temperature quickly became rather hot especially both Kelsey and I have dark hair. There is also very little shade in the open preserve. After hiking for 30 minutes, we took a water break under a big tree and then turned back. Compare Wildcat to Sorbante Ridge, I like Wildcat better for its varied scenery. At Sobrante Ridge, it seemed it was the same view endlessly - dirt road with dry grass taller than I on both sides with occasional trees. I saw just one person walking with his 2 dogs, who arrived after I did. I prefer to see a few more people when I go hiking, and Kelsey likes to see more dogs, too. Posted by Catalina at 6:31 PM No comments: 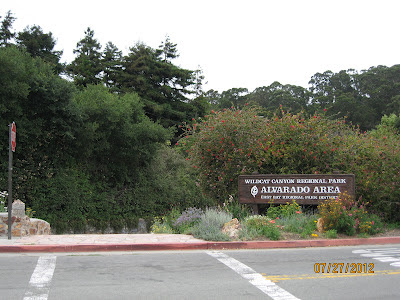 Since I returned to the world of full time workers, I haven't had much time to spend in open space. Yesterday I decided to hike in a park that I discovered recently, Wildcat Canyon Park. I drove pass by the park over a month ago while on my way to a birthday party. A few days ago, a dog walker at Point Isabel mentioned to me that Wildcat Canyon is also good for walking dogs. Yesterday I looked into Kelsey's eyes and promise her that I'd take her out on a real hike. This morning I arrived at Wildcat before 10 a.m. 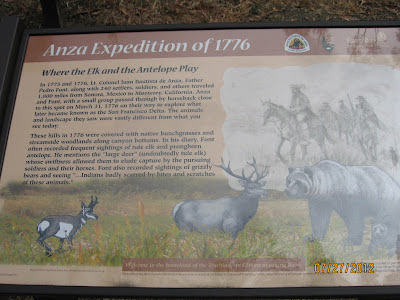 I love reading historical facts of our regional parks. It's a little sad that most of these native wild animals are no longer here. In Alvarado Area of the park, there are many picnic sites and a children's playground. After encountering a few people walking with their dogs, one dog owner described to me various hiking trials with good views. I took one of his suggestions and went up the hill. Dogs need to be on leashes in populated area, but they don't have to once they are out in the open space as long as they listen to voice commands. As usual Kelsey walked close to me as we hiked up the hill to the top. 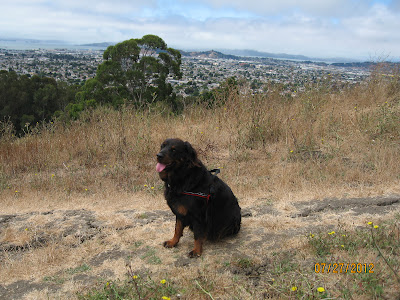 We were able to make a loop coming back down and return to Alvarado picnic area. I brought a jar of peach smoothie and a sandwich with me. I gave Kelsey some water and shared small bits of ham with her while I ate my lunch. It was a pretty good two-hour outing. I felt that Kelsey and I had a pretty good workout. I plan on going there again soon. 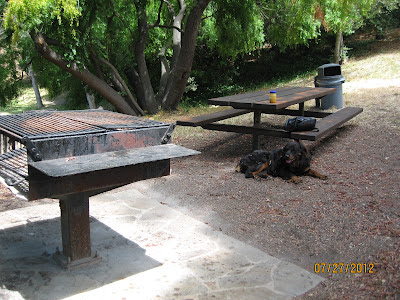 Posted by Catalina at 7:09 PM No comments:


We have a few steps outside of the backdoor, which is one of Kelsey's hangout spots. However, those wooden stairs had started to fall apart after 2 decades. One of the steps would sink in as you step on it. I was wondering if it would just crumble apart as Kelsey walking up and down the stairs. A few weeks ago, I decided it was time for some home improvement. Luckily, one of my neighbors knows a carpenter who lives just a few blocks away.


He came over on a Sunday with one of his helpers to rebuild the stairs for me. Originally, there were 4 big steps. He changed them to 6 smaller steps including a cement step at the bottom of the stairs. It took some time for the cement to set, and Kelsey had step in it as you can see in the right corner. The carpenters came back on a second Sunday to finish up the stairs and put on a layer of primer. Of course, Kelsey got some of the white primer on her hair, too, as she's been eager to go up to one of her favorite spots.


Kelsey also likes to rest in one of the flower beds. By now, she has torn out most of the calla lilies in there so she could just lie in the dirt. As any dog owner may know, she has to scratch the dirt several times to "make her bed" before lying down. The result is the dirt and mulch would be all over the walkway. As I was wondering how I could fix that problem, Kelsey and I passed by a crib mattress a few days ago as we were doing our morning walk. Someone had left it on the street to give it away, and it had been there for several days. It is in perfect good condition, and I thought it would be great for Kelsey. It took some time for her to get used to the smooth surface of the mattress, and I have seen her sliding off from it, but she seems to like it. 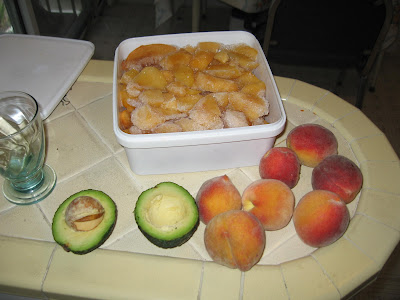 People have been telling me how tasty avocado smoothie is. It is quite popular in Vietnamese restaurants. I think it took almost 10 years for me to finally try it. It was not out of fear but simply forgetfulness. Since I started working in Oakland Chinatown in March, I have plenty of opportunities to have lunch in the surrounding restaurants. One of them is a small Vietnamese deli that sells mostly takeout orders over the counter. They also have a few small tables for people to dine in. A few days ago I had my first avocado smoothie, and it was quite good. You know I was watching the woman making it behind the counter - one avocado, crushed ice, and some condensed milk. I think those were all the ingredients. 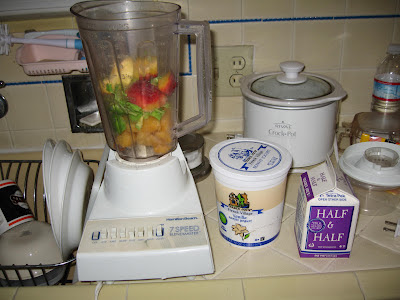 Since I have plenty of ripe peaches, I have to add peaches into my smoothie. I also wanted some vanilla yogurt in it, because I like yogurt. So I put some frozen peaches, fresh peaches, one avocado, some vanilla yogurt and some half and half in the blender. The half and half is just for extra liquid so everything can start to blend together. At the end I also added some honey. The result is some creamy all natural smoothie. The only thing I'll do differently next time is to use a more ripen avocado. The bag of avocado I just picked up from Trader Joe's are all still very hard.  I will let them sit for a few days, and I am sure next batch will be even better. 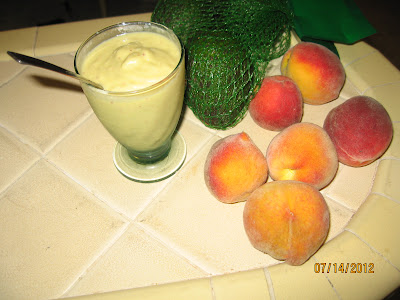 Posted by Catalina at 8:45 PM No comments: 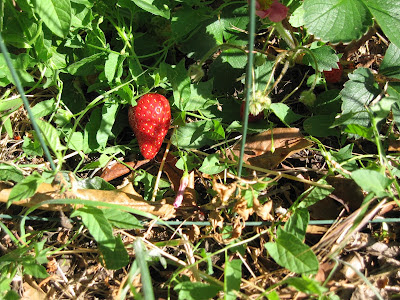 I was surprised to find whole ripe strawberries in my little strawberry patch that grew back from last year. I had long given up on growing strawberries due to squirrel bandits. However, this year I have Kelsey, who loves chasing after squirrels. I can now grow strawberries! I wish I had planted more this year. 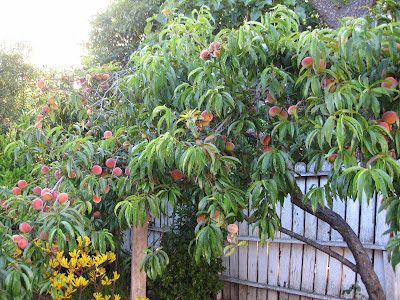 I also find a lot  less partially eaten peaches on the ground this year. I am sure Kelsey has been busy chasing the squirrels away. It looks like in a few days I will need to start picking the peaches. The cherries also managed to ripe without being snatched by the squirrels. I picked all of them today and ate them right away. They were super sweet! 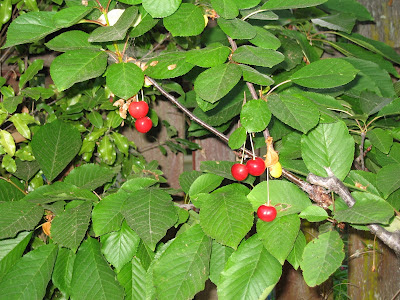