Kelsey is a Lover Not a Hunter I have been pretty lucky that I don't seem to have gopher problems although I have seen a mound of dirt in my front yard, which is an indication there might be gophers. I don't grow anything edible in the front yard other than some herbs and self grown blackberries.

I always suspected that Kelsey is incapable of killing anything. Today I took her to Point Isabel, where you will often find evidence of gophers' presence such as holes on the ground and mounds of dirt in the meadow. Kelsey and I walked pass a hole next to a mound of dirt, and I immediately saw a gopher head popping up and down. Kelsey just kept on walking, but I was curious. She was observant enough to notice that I noticed something on the ground and turned around. She poked her nose in the hole. I told her no because I was worried that her nose would get bitten by the gopher! 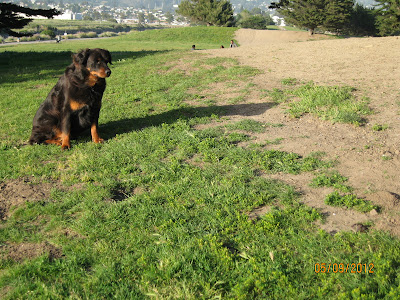 The gopher seemed to think of it as a game. It popped its head in and out as to tease us. Kelsey just sat her butt down and watched. She was curious, but since I told her no, she just stayed put. My previous dog, an Alaskan Malamute, would have snatched the gopher, shake it left and right until it was dead. There would be no stopping with the Malamute. Kelsey just wants to be friends with every living thing whether it's a cat or a bunny. She sat there watching the gopher in the hole until I was done taking pictures then we moved on. 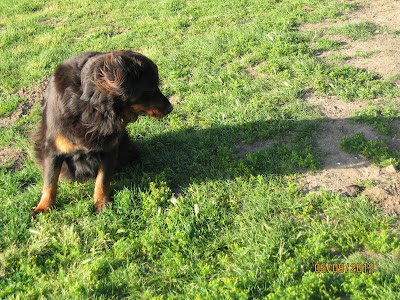