We had some heavy down pour rain for the past 48 hours, it seemed. I started to wonder if it was ever going to stop. Everything outside is completely drenched. When the rain first started, I went outside to rearranged some of the plants. I wanted to make sure most of them got as much rain water as possible while save some from drowning in the rain. Kelsey was excited to see me going out to the garden and wanted to follow me everywhere. She turned into a pathetic looking wet dog within seconds.

Finally we are now having a break from the heavy rain. It suppose to return shortly, so I went out to check on the plants. I found a couple asparagus shoots that weren't there before the rain. The snow peas seem to be a lot taller than before. The pumpkin seedlings are a lot bigger than 2 days ago.


I just separated some mizuna seedlings a few days ago when it was super sunny. They all seem to be doing quite well. I am waiting for them to get about 3 times as big before planting them in one of the vegetable beds. I am excited at the idea that I may have fresh salad greens to pick. I was not a salad enthusiast as I had always preferred to eat cooked and hot food except sushi. Late last year I really got into salads, thanks to Trader Joe's awesome salad selection. After buying Trader Joe's boxed salads for a few weeks, I decided it would be more economical and environmental friendly to buy the ingredients separately and make my own salad mixes. You know where this is going - I am now trying to grow my own salad greens. Knowing how bug prone my leafy vegetables are, I am skeptical how well I can grow my own salad greens, but I shall try!

Posted by Catalina at 2:44 PM No comments: 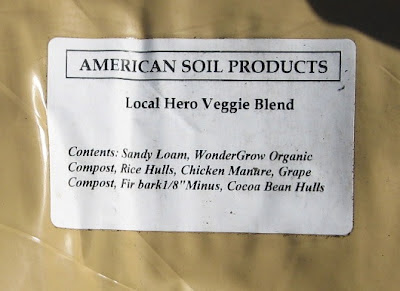 I am having a late start on planting this year, and spring seems to be coming early. During the weekend I stopped by American Soil and Stones to get more soil for the vegetable beds. I normally get Ultra Potting Mix or Ultra Bedding Mix, and they are $9 and $8.75 a bag. I decided to look at their price list carefully to see whether they have cheaper mixes. I was surprised to see that they also have "Local Hero Veggie Garden" at $6.50 per bag.  It contains several kinds of compost and chicken manure. That sounded perfect. I got a few bags and even mixed in some Dusty's poop as I filled up my veggie beds. 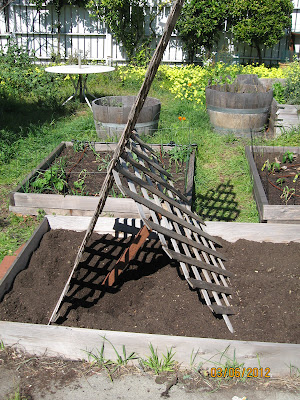 I wanted to get the snow peas into the ground but I had to figure out where and what they can climb. I have planted them next to the the arbor in the past, but I want to save the arbor for passion fruit. Last year I planted the snow peas in a wine barrel all the way in the back of the farm. I don't want to do that this year because I want to keep all the vegetables in one area for easier access. Besides, I might want to put in another fruit tree at the spot where the wine barrel is. So, I decided to use a piece of left over material from the arbor to make a 5-foot-tall trellis for the snow peas. I know snow peas usually grow much taller, but I can't get to the peas high up anyway. There's no reason to create more work for myself.

It happened to be a very windy day today, so this trellis got blown over several times as I tried to stabilize it. At the end, it stood its ground regardless how hard the wind blew. Now I know it will be safe for the season. It's not the most beautiful thing I have ever put together, but it is functional, sturdy and didn't cost me anything. I can't wait for the snow peas to start climbing on it! 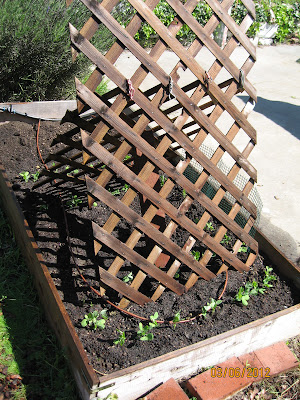 
Late last year, sometime after my trip to the Scandinavia, I thought of fostering a dog. By chance I came across a posting on Craigslist that a dog rescue group was looking for a quiet household to host a dog for post heartworm treatment. The posting indicated the dog needed to eliminate all activities while recovering from the treatment - no walks, no exercise, no excitement, and no jumping. An ideal situation would be staying in a garage of a childless household. I thought that sounded easy enough. I didn't even have to walk this dog. All I needed to do was making sure she was fed and had plenty of water. I spoke to the woman running the rescue, Hound Haven Hope Rescue, a few times over the phone, and it was settled. I was scheduled to pick up the dog at Bonnie Brae Kennel after she was transported from Lake County.

I was surprised to see the dog's docked tail. I was even a little disappointed for her lack of tail. She appeared to be shy and a little timid when she met me but was happy to go along with me.  On the drive back home, I could see her smiling from the rare view mirror.

I don't know much of her past. She was available for adoption as a stray at Lake County Animal Care and Control. I know that shelter is often over crowded, and many animals are euthanized. The rescue group got her out of there because they believed this dog would make an excellent companion for someone. They named her Kelsey and had a veterinarian giving her a physical. That was when they discovered that Kelsey had heartworm infection. They estimated her to be about 6 years old and a mixed breed of Rottweiler and Australian Shepard.


I am no stranger to dogs. My parents adopted a doberman when I was a kid. I had an Alaskan Malamute in college and spent years working in Veterinary Medicine Teaching Hospital at UC Davis.

Although I have worked with hundreds of dogs, I was impressed with Kelsey for how well behaved she is. I am somewhat of a lazy dog owner, so I never adopted a puppy. I prefer full grown dogs who were already trained. Kelsey understands everything. After her recovery period, I realized that I could take her to off-leash dog parks. She is friendly with people and dogs of all sizes. Some little dogs would bark or growl at her due to fear, and Kelsey would just back off and walk away.  She would always make sure to walk near me. It turned out that is one of the traits of Australian Shepherds. They are often called "Velcro Dogs" for their strong desire to always be near their owners and for their tendency to form intense, devoted bonds with select people. While Australian Shepherds tend to be very active, Rottweilers are calm and more laid back, so she's got a good balance from both breeds. Needless to say, I decided to adopt so she could stay on the farm with me.

I am mostly relieved that Dusty shows no fear around Kelsy, and Kelsey shows no aggression towards Dusty. They don't exactly play with each other, but they could lay next to each other with the glass window in between them and feel totally relaxed.

Posted by Catalina at 5:35 PM No comments: