Back on May 2, 2010, I participated in bee swarm capture for the first time. The bee colony we captured had lived on Merritt College campus for just under 2 years. Last month we opened the bee box and the entire colony had disappeared. Master Ken told us that the bees were still in the box a week ago when he checked on it. He said there could be many reasons why the bees decided to abandon their hive. There was still a lot of honey left in the hive, which we would harvest as a class and share among us. In addition to honey, we would also harvest the wax, which was regarded even more valuable than honey in the past. 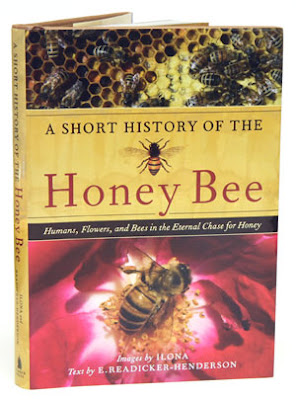 The disappearance of the bees troubles me greatly. I have been reading about collapse colony disorder (CCD) since it was first discovered in 2006. I have read that it mostly affects commercial beehives and not beehives that people keep in their backyards. I hope that is still the case. In order to better educate myself in honeybees, I checked out a few books from San Francisco Public Library when I happened to be in neighborhood. One of the book is called A short History of the Honey Bee, which I think is an excellent book for someone who enjoys leisure reading. The author, "E. Readicker-Henderson is a beekeeper turned regular writer and contributor to National Geographic Traveler, Sierra, and others,..." He describes the taste of raw local honey beautifully, which brings tears to my eyes.

I also looked for documentaries on honeybee and found full episode of Silence of the Bees on PBS.org. From the documentary, I learned that in Maoxian county of Sichuan, China, people have to pollinate their fruit trees because they have lost their bees due to heavy use of pesticide. Can you imagine that? Can you imagine that you can't have an apple unless you pollinate apple blossoms one by one? That is frightening to imagine.


Watch Silence of the Bees on PBS. See more from Nature.
Posted by Catalina at 7:04 PM