For the evening Halloween party last night, the host of the party had asked me whether I could make the "gluten free chocolate cake" again. "Gluten free chocolate cake"???? I couldn't remember making anything like that. It seems that in recent years, many people have discovered that they are wheat sensitive. Many people are getting on the gluten free diet. I love bread, and I just love wheat products in general, so I couldn't think when I had bake a gluten free cake. Suddenly I realized that he had to be talking about one of those mochi cakes that I often bake. I grew up with mochi. Mochi is made of rice, so it is naturally wheat and gluten free. Any mochi dish I bring to potluck these days becomes an instant hit.


Most people love brownies. I have never been a big fan of it because it is usually too sweet and rich for me. These days, wheat sensitive people are saddened by the fact that they can't eat regular brownies. I baked 2 trays of mochi brownies last night. It's super easy and you can adjust the amount of sugar and chocolate to your liking. I don't make it super sweet or rich, and people seem to love it just fine.

I get just about all of my mochi recipes from Jenn, so I am not going to repeat the recipe here. Just click on Chocolate Mochi Brownies and follow Jenn's step by step instructions. Check out other recipes while you are there.

Posted by Catalina at 1:32 PM No comments: Links to this post


I have been taking a class on Saturdays for the last 10 weeks in order to become a certified tax preparer. Today is the last day of the class, and we planned to have a potluck. I volunteered to bring a pie. You know me, I have to make everything from scratch unless I have no other choice.

I knew that I wanted to bake an apple pie since I haven't baked one with the homegrown apples this year. Last night I made the pie crust dough, separated it into two balls, wrapped each one of them in saran wrap and stuck them in the fridge. This morning, I got up around 7 A.M. and started slicing apples. I cut up about 12 apples since they are smaller than commercial apples, and I have plenty of them. I like to make my apple pies with extra apples. 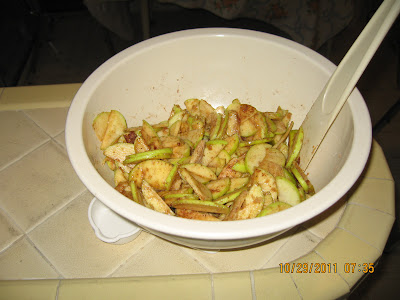 I rolled out the pie dough. One ball was to line the pie plate, and the other one was to cut into stripes for the lattice top. I let the pie bake in 400 degree oven for 25 minutes, then brush on egg wash all over the lattice top and let it bake for 25 more minutes until it was golden brown on top. The house smelled so good with the freshly baked apple pie. I wish that I could bottle this scent so my house could smell like a bakery all the time. 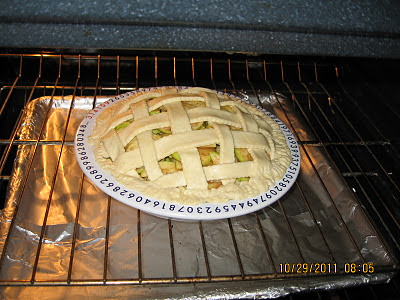 Here's the my apple pie recipe:

Filling:
A bunch of homegrown apples (or 6 Jona gold apples). I don't peel my apples but you may peel them. Cored and sliced
1/2 cup sugar
1/4 cup flour
1/4 cup packed brown sugar
1 teaspoon cinnamon
1/2 teaspoon nutmeg
1 egg
a pinch of salt

Preheat oven to 400 degrees F.
To prepare the pie crust, combine the flour and salt in a large mixing bowl, cut in the butter with a pastry cutter or plastic knife until the pieces are the size of small peas. Sprinkle 6 tablespoons of milk over the flour and gently toss with a fork. Push the flour to the side of the bowl to form a well. Add the remaining cold milk and mix until all is moistened and combined. Divide the dough in half, and form each half into balls. Wrap each ball in plastic wrap and refrigerate.  Note: try not to overly handle the dough with your warm hands. The pie crust will bake like flaky pastry with all the butter pieces embedded in it; however, if you handle the dough too much, the butter will melt then it doesn't come out as flaky.

In a large bowl, mixing the apples with sugar, flour, brown sugar, cinnamon, and nutmeg. Set it aside.

On a lightly floured surface, roll out one ball into a 12-inch circle and place it into a 9-inch pie plate.

Transfer the apple mixture into the pastry lined pie plate. For the top crust, roll out remaining dough, cut it into stripes and weave them  (as shown in the photos). Alternatively, you can just place an entire sheet on top, seal and flute the edge. Cut slits on top crust to allow steam to escape.

To make the egg wash, crack egg in a small bowl, add a pinch of salt, whisk with a fork, and brush on top of the pie after it's been baked for 25 minutes. After egg wash is brushed on, bake it for 25 more minutes or until it's golden brown on top and apples are tender. To prevent the top from over browning, you can place a sheet of foil on top if it needs to be baked longer. 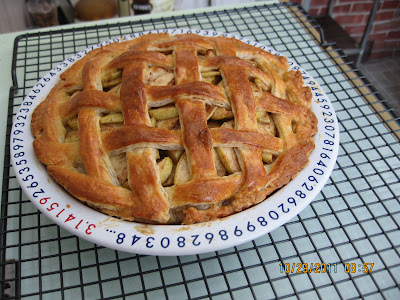 Posted by Catalina at 3:45 PM No comments: Links to this post


I have been under the weather since October 2nd. I started out as a sore throat, then a fever, then a week of bed rest, then another week of constant coughing. Today is the first day that I woke up feeling all better. I went out to the farm to collect some fresh produce. I gathered a bunch of tomatoes, green beans, and oyster mushrooms! I also picked a couple Mandarin oranges and a fig that had not been chewed on by the squirrels.

The oyster mushrooms were doing extremely well for a few days when it rained. The temperature however got a lot warmer, and we seem to have an Indian summer after the few days of rain. The unusual warm temperature was good for the tomatoes but not so good for the mushrooms. A lot of the pins on the mushroom kits dried up, but I still managed to harvest many large plump mushrooms twice!


The rain we had for a few days helped many vegetables on the farm especially since I was not able to go out there and check on them. There are many self propagated dinosaur kale and broccoli DeCicco. The potatoes are all green and lush.

Now that I am feeling a lot better, I'll be getting back on my healthy organic diet again with lots of exercise.

Posted by Catalina at 10:19 AM No comments: Links to this post


On September 23, I picked up a couple oyster mushroom kits from The Mushroom Maestros. I hang up the kits in my garage that night, and on September 26, I saw white mycelia spreading all over the straws. That was a very good sign. However, on October 3, I also noticed some greenish areas in the kits. That was a bad sign. The green spots were likely to be getting moldy. When you see green mold growing on your mushroom kits, you can try to cut the green parts off. That's easier to do if you have a block mushroom kit. Since I have a straw kit, I just hoped that oyster mushroom mycelia would be able to fight the mold off. There were certainly a lot of good white mushroom mycelia, so I just let nature took its course.


Last week the weather had dramatically changed. We had 2 days of heavy rain, which was somewhat rare for the Bay Area to have rain so early in the (mushroom) season. This morning I checked on the kits again, and one of them is pinning (see photo below). I filled up a water bottle and misted both of them. It is raining again today, and that should further help the pins and mycelia to grow. This is definitely the farthest I have gotten with this type of mushroom kit! I will be checking on the kits on a daily basis from here on. 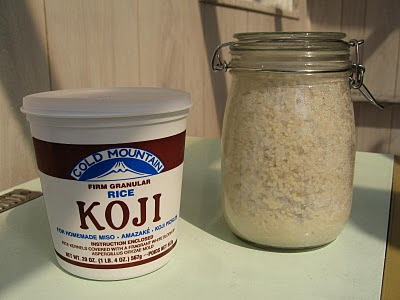 Earlier this year, someone brought a jar of white liquid content to Master Ken's lunch potluck. As usual I was curious and eager to try something new. The guy who brought the jar of white content explained to me that it was Amazake, a Japanese rice drink. He warned me that it might be an acquired taste for some people. I took a spoonful to try and was immediately in love with the drink. It's sweet and made of rice. What's not to like? I started asking the guy how he made Amazake so that I can make my own.

Amazake (甘酒, [amazake]) is a traditional sweet, low-alcoholic Japanese drink made from fermented rice. Amazake dates from the Kofun period, and it is mentioned in the Nihon Shoki. It is part of the family of traditional Japanese foods made using Aspergillus oryzae (麹, kōji?) that includes miso, soy sauce, and sake. (Wikipedia)

A few days later, I stopped by Tokyo Fish Market to get some Koji rice. The Koji rice has an expiration date in 2012, so I left it in the fridge for the time being. Today I thought it would be a good day to make some Amazake, so I looked over the instructions that came with Koji rice and started cooking a cup of white rice. After about 50 minutes, I let the cooked rice cool down to 140 degrees (F) and stirred in 2 cups of Koji rice. The mixture was then packed into a clean wide-mouthed glass jar. I will now incubate the jar of Koji rice mixture at 131 to 140 degrees (F) for 10-14 hours. 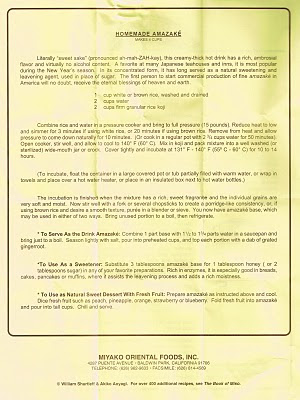 Posted by Catalina at 1:52 PM No comments: Links to this post