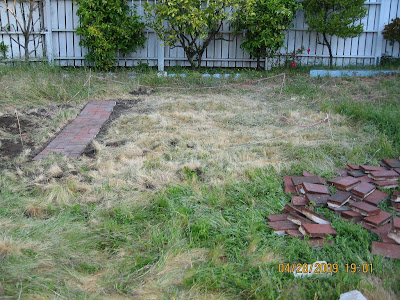 When I was pulling weeds yesterday, I thought about how I put together this brick patio all by myself without spending any money other than gas for transporting the free material. It was back in 2009 before I started my vegetable garden. I just wanted an area in the middle of the yard that I could put a patio set as a gathering spot.

I didn't want to spend too much money on the project, so I started looking into "free" section under "for sale" on craigslist.org. I was only interested in picking up free material within 5 miles radius from home. The posting I had been waiting for showed up one Saturday morning. A house up in Kensington was being remodeled, and they had taken down their old fireplace. The bricks from the fireplace were outside of the house free for the taking. I responded to the posting, got the address, and went up to get the bricks. I roughly estimated that I needed at least 400 bricks for the size of my patio. 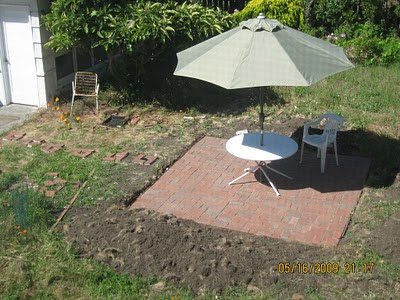 The bricks were quite heavy, so I made at least 6 trips in two days to upload and unload the bricks. I also picked up some free sand from a house in Berkeley. Before I could lay the bricks down, I had to dig up the weeds. That digging was a back breaking job since the soil was extremely dry and hard. Finally, on April 29, 2009, I start putting the bricks together. I had never put anything together like this before, so I looked up some patterns and methods on the internet. That was all the knowledge I had. Everyday after work I was out there assembling my patio for the next two weeks. Some bricks had mortar attached to them, so I had to either try to knock the mortar off or dig the ground to fit the uneven bricks.

As I was finishing up the patio, I picked up a free patio table with 2 chairs in Albany. The table was small enough to fit into the back of my PT Cruiser. I put 3 coats of paint on the table. I also picked up a free patio umbrella from a nice elderly woman in El Cerrito Hills. The woman explained to me that the squirrels had chewed up the fabric at a few spots; other than that, it was a really nice umbrella. I didn't mind the holes. I could sew them up easily. That was a much easier job than paving the bricks!

So, this is how I got my patio. About a month after its completion, I hosted my first BBQ in the garden to celebrate my cousin's going off to college.