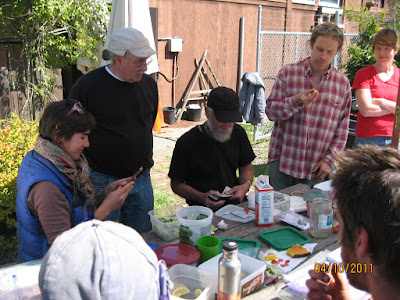 Towards the end of our Sunday potluck, I saw Jason brought over two Tupperware full of lemon and lime wedges, a bag of salt and vinegar chips, and a brown paper bag. I thought that was odd that he brought in his potluck item when we were almost done eating, but what were the lemon and lime wedges about?  Surely we weren't just going to eat them.

My confusion didn't last long as Master Ken started to explain what Miracle Berries (Synsepalum dulcificum) were and how long the artificial sweetener industry has been trying to keep them out of U.S. market. "Synsepalum dulcificum produces berries that, when eaten, cause sour foods (such as lemons and limes) subsequently consumed to taste sweet. This effect is due to miraculin, which is used commercially as a sugar substitute. Common names for this species and its berry include miracle fruit and miracle berry. The berry itself has a low sugar content and a mildly sweet tang. It contains a glycoprotein molecule, with some trailing carbohydrate chains, called miraculin. When the fleshy part of the fruit is eaten, this molecule binds to the tongue's taste buds, causing sour foods to taste sweet. While the exact cause for this change is unknown, one theory is that miraculin works by distorting the shape of sweetness receptors "so that they become responsive to acids, instead of sugar and other sweet things". This effect lasts 15–60 minutes." (excerpt from Wikipedia)

Jason brought in 5 berries and a pack of mberry tablets, which are made from miracle berries. He also brought in lemon and lime wedges, a bag of salt and vinegar chips, and a bottle of apple cider vinegar for us to have a taste test. I became more and more excited as Master Ken explained what these berries do. The fresh berries were ordered online, and they were $5 each! The tablets were picked up from a store in New York when Jason was there recently. Many of us donated a few dollars to Jason since he  spent quite a bit of money to get these items.

The berries were cut up in small pieces and the seeds were saved so we can try to grow them in the green house. Some of us took the fresh berry pieces and some took the tablets. I took a tablet. For a few minutes, we sucked on the tablet and swirled it inside of our mouths so it could start to take effect. As soon as the tablet completely dissolved, I started with a piece of lemon wedge.

"It tasted like a piece of sweet orange. It didn't taste sour at all!" I announced to the group. Now everyone started to take lemon wedges or lime wedges. I then tried a piece of lime. It was sweet as well. That was so amazing. I took a small piece of strawberry, and it was super sweet. The cherry tomato was sweet. The apple cider vinegar tasted really good. Wow, I couldn't believe it! The lemon and lime wedges were disappearing fast.

We were all trying different things on the table and laughing. It was just amazing. All of us are pretty healthy, and we certainly don't have much need to enhance our taste in sweetness. We talked about how cancer patients and people with health issues can benefit from the berries. I personally never consume artificial sweeteners. I have grown stevia and I love pure honey. I use real sugar when I bake sweets. For people who can't have real sugar, Miracle Berry would be a much better alternative than any artificial sugar substitute. 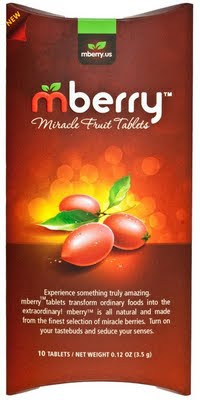