This past Sunday's class was quite exciting. First, we had a swarm of bees to capture then we got to try Miracle Berry and MBerry tablets. I will have to write about the experience with Miracle Berry in a separate blog entry.

When I got to the class on Sunday, it was windy and overcast. When I left the box of oatmeal cranberry white chocolate chip cookies on the potluck table, there was no other food item there. I wondered if we were going to have anything to eat. A few people were scattering around the hill. I heard them talking about a bee swarm. A bee swarm! Awesome! I made a connection with bees last May when I first witnessed the capturing of a bee swarm.

I immediately ran over to my car to get my camera. I had to get it on video this time. 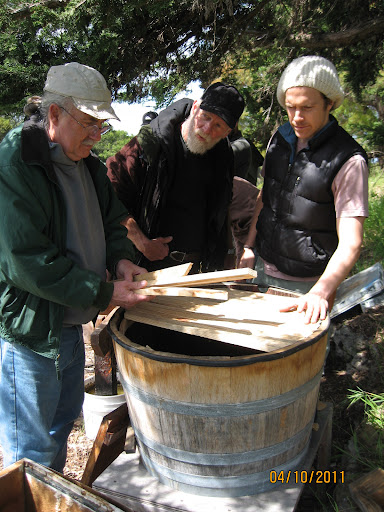 Master Ken, David, and John showed us a prototype top bar beehive that Nobuto made with a half wine barrel. Nobuto was in one of the classes last year. He has carpentry experience and the work he did with each top bar shows. They all fit perfectly on the top of the wine barrel. I remember how much difficulty I had trying to make a top cover for the fish tank that I donated to the class for snail ranching.

They set up the wine barrel beehive for the new swarm we were going to capture.

By now I am pretty calm with the bees buzzing near me. I also have a lot of trust in John, Master Ken, and David as I have seen them handling bees over several semesters. John keeps bees on his own homestead farm, so he has his own first hand experience with bees.

Unless you were as fortunate as I to personally witness bee swarm capturing with this group of people, it is hard to convince you how peaceful it felt. Of course you have to remain calm. Master Ken also mentioned that bees do not like the smell of banana, so don't eat banana before getting close to the bees. The video is about 7 minutes long, but the actual process was more like 1 hour. It was done very slowly and carefully. They are not commercial beekeepers and tried not to hurt any bee in the process.


After David brushed all the bees into the beehive, they put the top on the wine barrel to let the bees settle in. We filled the buckets which the legs of the beehive bench sit in with more water. The water prevents the ants from crawling up the bench to get into the hives. The weeds and tree branches around the beehives were also removed to prevent them from touching the beehives and became bridges for ants. If ants got into the hives, the bees would abandon the hives. 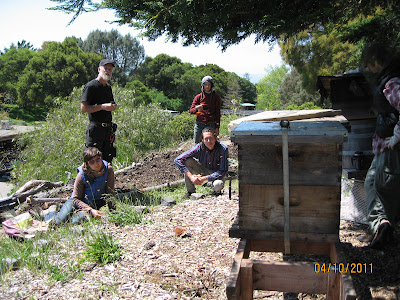