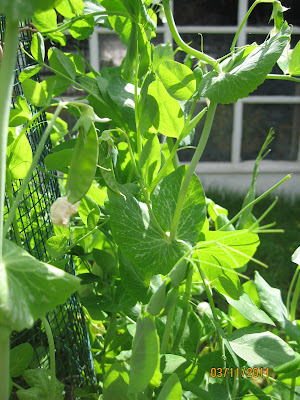 I apologize for the lag on my blog this month. It's been extremely difficult to concentrate on anything with the triple crisis taking place in Japan. My deep connection with Japan makes it even more heartbreaking for me to think of all the lives that were lost and how the survivors are going to overcome this disaster. Being in the Bay Area, we are no stranger of earthquakes. People sometimes ask me what I would do in the case of a big earthquake. I tell them that I would just run to my farm. It would be safe from being buried by fallen objects, and there's food to eat. However, in the case of a tsunami, the only way to survive is to outrun the ocean. It destroys everything in its way including vegetation. In an event of a tsunami aftermath, there would be nothing left to eat even if you had a farm. 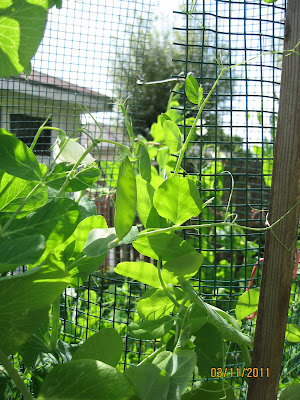 It's been raining on a regular basis for the past 3 weeks. I have been turning the irrigation system on and off so frequently that I can't remember whether it's on or off right now. It looks like more rain is coming this weekend. Due to the rain, everything is green and thriving on the farm. The snow peas are started to grow faster now. I have already picked a bunch of them. 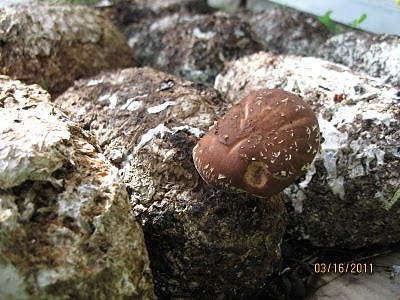 The mushroom blocks that I brought back from Far West Fungi Farm in mid-October last year are still popping out Shiitake mushrooms due to the regular rain. There were some oyster mushrooms, too, but the slugs seem to like them more than Shiitake. I picked the mushrooms to cook with the snow peas. It's a good combination.