It was over 80 degrees this afternoon. It started to feel like summer already. People were out in summer dresses and shorts. There were young men riding their bicycles without shirts altogether. What a big difference from last week!

I was just out pulling some weeds as the sun was going down. I noticed that I had accidentally cut one of my irrigation tubes as the water was spraying everywhere. I did a quick fix for now. I will need to be more careful when I go out cutting vegetables at night in the dark.

As I was wrapping up from weeding, this Black Swallowtail startled me as it passed in front of me and landed on the lavender. It just sat there as I snapped a few closeup pictures with my LG Lotus. Since it didn't seem to mind my face practically touching it, I ran inside to get my Canon to get better pictures. Black Swallowtail caterpillars are a frequent sight on the farm. They were usually on the fennel, which has been removed during the makeover last November. I wonder whether this butterfly is going to lay eggs on the lavender.  As I headed inside, it was still resting at the same spot. 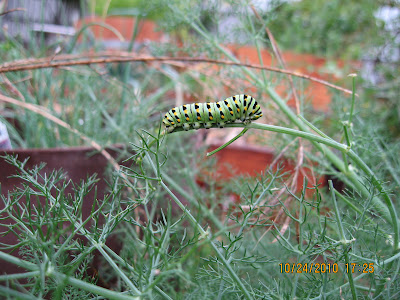