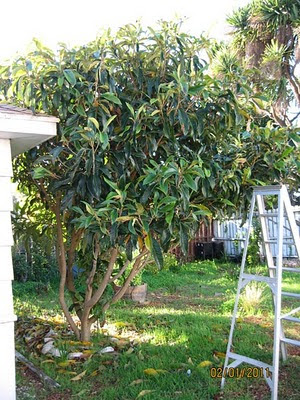 I have wanted to cut back the loquat tree for months. Time is running out since pruning needs to be done by early spring before the fruit tree starts to bloom. This afternoon I grabbed the ladder, pruning shears, and the Silky Pocket Boy, to get to the business. According to Wikipedia, loquat tree is an evergreen large shrub or small tree. In my case, it's the largest shrub and tree on Sand Village Farm. Since it's evergreen, it never goes dormant like the peach and apple trees. Loquat's large waxy leaves are falling all year round and they take years to decompose. I made the mistake of filling up my compost tumbler in December 2009 with loquat leaves, and they still haven't fully decomposed.


As I started to prune the tree, I found several clusters of flowers. I made sure that I didn't cut them off by accident. Although this tree is quite large, it produces very few loquats. I am not sure whether it was because it was grown from a seed or just lack of pruning. In addition to low production, the squirrels and birds tend to get the loquats first.

I tried to thin out the tree for several reasons. By thinning the tree, hopefully, more energy will go into producing fruits instead of growing leaves. Secondly, it would be a littler easier to pick the fruits if I am lucky enough to get a few. 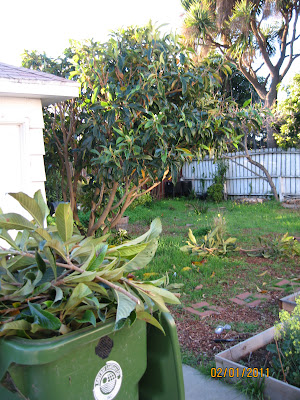