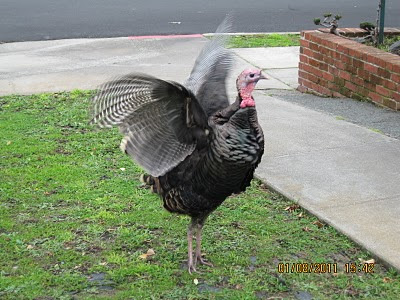 I spotted 3 turkeys on October 24th last year. I had wondered whether they were someone's pets or Thanksgiving dinner. Today I went down to El Cerrito Library on Stockton Ave. On my way back, I saw turkeys and a group of people standing on the corner of Elm and Stockton. I pulled over and ran back with my camera. There were about ten turkeys altogether leisurely walking around on both sides of the Elm Street. They seemed to really like the front yard of one house on the corner. The resident of the house stood on the front steps talking to all the people in front of his yard. It felt like a community event. I thought maybe he owned the turkeys. 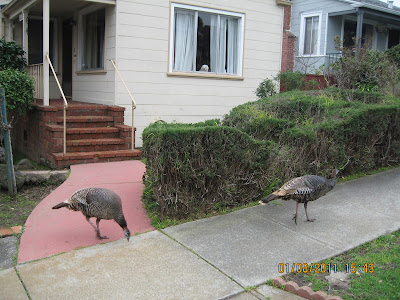 He told us those are wild turkeys that come down from the hill occasionally, and that his 3 Malteses would go nuts barking at the birds. I could see the cute white dogs in the window. One of them had a pink sweater on. It appears these turkeys have become more comfortable with human interaction. I was able to get a lot closer this time. Someone even threw some bread pieces at them. Many people stopped by to take pictures of them. Some of them also saw the turkeys around Thanksgiving near the BART Station. I only saw 3 last time, and these time, there were about 10. I wonder if the turkey gang is going to get even bigger next time I see them.