A few days ago, I took home a bunch of scions from Scion Exchange. I got some time today to get started on the Morus alba mulberry scions. According to Wikipedia, Morus alba also known as white mulberry, is a short-lived, fast-growing, small to medium sized mulberry tree, which grows to 10–20 m tall. The species is native to northern China, and is widely cultivated and naturalized elsewhere. It is also known as Tuta in Sanskrit and Tuti in Marathi.

The white mulberry is widely cultivated to feed the silkworms employed in the commercial production of silk. It is also notable for the rapid release of its pollen, which is launched at over half the speed of sound.

When I was a kid, I was always looking for mulberry trees in the neighborhood so I could go pick the leaves for my silkworms. It was fun to watch the silkworms eating the leaves, getting bigger, and finally spitting out silk and wrapping themselves in silk cocoons. However, when they came out as moths, I thought they were scary looking.


I started with placing some rocks over those big holes in the bottom of the one gallon planter. Those holes are so big that if I don't cover them up, the soil would just leak out as I try to fill it up. After I placed the rocks over all 5 holes, I started filling it up with potting soil.

I used a candle to drip some wax on the top openings of the scions to prevent them from drying out while they try to root. Make sure that you have the scions' top ends pointing up before you start sealing the tops. You can tell which end is the top by looking at the bud nodes. The bud nodes should point up.


I was then ready to treat the ends of the scions. I dipped each one in water first then dipped in the rooting hormone powder, which you can get from any nursery even Home Depot. I tapped each scion to remove excess rooting hormone and then stuck them into the soil in the pot.  This is exactly what the volunteer at Scion Exchange told me to do. I watered the soil so that it was fully moistened, then I sprayed the scions with a water bottle. I left the pot on the propagation table since it's misted every morning. We will now wait and see whether they will start to grow. 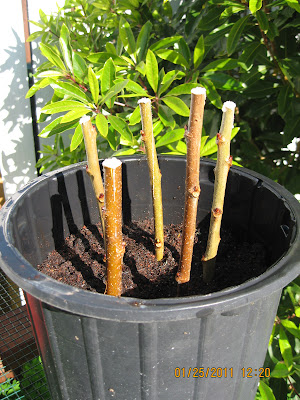