Bees Are Smarter Than You Think


I came across an article, Study by 8-year-olds published in prestigious science journal, this afternoon. It caught my attention for several reasons. The title alone is impressive, but it was also a study on how bumblebees see colors and patterns. How did the 8-year-olds manage to study the bumblebees? I have a hard enough time just to get a decent photo of them. They seem to more skittish than honey bees, and I can never get close enough to get an extreme close-up of them.

Below are some excerpts from the article:

Biology Letters, a peer-reviewed journal of Britain's Royal Society, on Wednesday published a report (PDF, complete with colored-pencil diagrams) on how bumblebees see colors and patterns -- conducted and written by a group of 8- to 10-year-olds in Devon, England.

The budding scientists, working under the "light supervision" of a neuroscientist from University College, London, trained bees to go to targets of varying colors by rewarding them with sugar. They reported that the bees were capable of learning and remembering cues based on color and pattern -- a finding that the Royal Society called "a genuine advance."

The Royal Society is more than 300 years old and includes some of the world's most eminent scientists.

The report's language isn't quite what you'd expect to find in a scientific journal. "Scientists do experiments on monkeys, because they are similar to man," the introduction reads. "But bees could actually be close to man too." 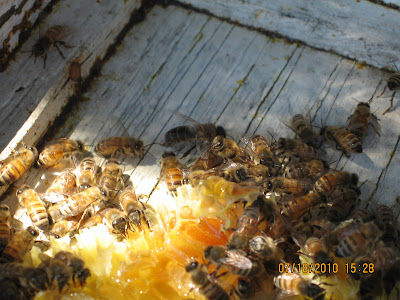 These kids have trained the bees to learn and remember colors and rewarded them with sugar!!!! How awesome is that!!!!??????  I was just about to flip over in my chair as I read this. I spent some time learning about bees and beekeeping in Master Ken's Beneficial Beasts in the Garden class. I was surprised at how peaceful the honey bees are. They really are not as scary as people think once you know how they behave. The sad part is, most people refuse to spend 5 minutes of their time to learn how honey bees "think." When I try to explain to people that bee swarms are not there to attack people. They usually try to cut me off by telling me how dangerous they are especially when there are children around. Well, I have seen the students on Merritt College campus scooping up the bee swarm with no special protective gear and nobody got stung. These 8-year-old children have successfully trained their bees for their science experiment, and it's now published in The Royal Society. Perhaps, some adults are not giving children enough credit and forcing their own fear onto their children.

The children concluded: "We like bees. Science is cool and fun because you get to do stuff that no one has ever done before."

Indeed! This was the most awesome news I have seen in a while. 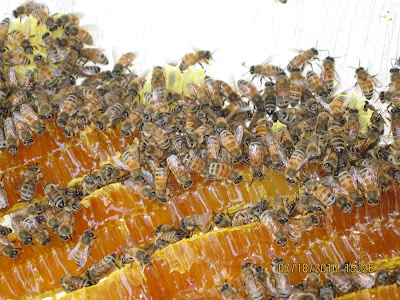