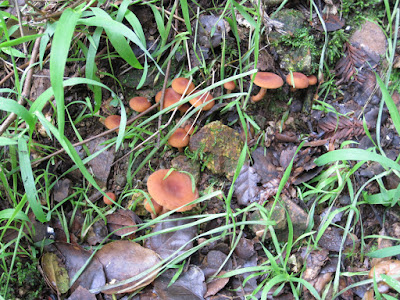 I am usually stuck inside of the cubicle world during weekdays until it is too dark to go mushroom hunting.  Yesterday the big boss told the only three people that came to the cubicles that we could all leave at 1 P.M. I was planning on leaving early to revisit my candy cap spot. Two weeks ago,  I saw lots of baby candy caps there. It rained almost everyday last week, so I figured they should be ready now. Besides, it's the day before the most anticipated holiday of the year. Nobody else would be there. It would be perfect to go today.

When I got to the trail, I heard voices. Hummmm... I was a little surprised that there were other people here. A group of extended family members, kids, dog and all, were on their way out. Some of them were carrying plastic bags. Yes, they had been picking. One of the kids was leading the dog. The dog was very friendly and immediately came up to me for some petting.  They saw me with my mushroom basket, so one of the women told me that candy caps are everywhere, and they couldn't pick them all. YES!!!!!! I was screaming with joy inside as I headed further down the trail. 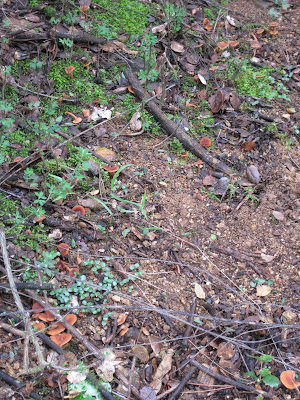 I had to take a few moments to adjust my eyes from cubicles to nature before I could see them. Suddenly all the candy caps were popping out at me.  I started bending, picking, trimming, squatting, reaching, picking, tripping over branches, trimming, picking, picking, and picking. I had to try not to step on the candy caps since they were everywhere. I normally just pick as fast as I can and deal with cleaning when I get home. Since nobody else was around, I decided to take my time and trim off the dirty parts before putting them in my basket. The mushrooms are mostly clean on the caps except the end of the stems. Since candy cap stems are just as good as the caps, I don't just pick the caps. I pull them out from the dirt. I was holding my pocket knife with one hand to trim off the parts with soil. I also found a few amethystina. An hour passed, and I had started fill up my basket (see photo below). 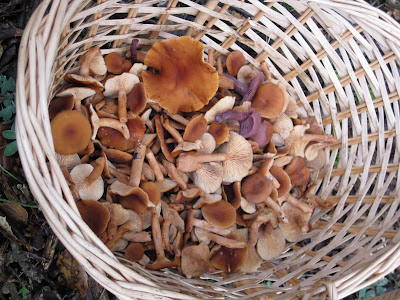 As I moved further down the trail, I saw even more and bigger candy caps. As I bent over to pick them, I noticed even more bigger candy caps inside of the bushes next to the trail. They were more than I could pick. At this point, I decided to share the wealth and texted Chef Pauly with a "candy caps are everywhere" alert. He texted me back saying that he was on his way. Those branches didn't look like poison oak to me, so I decided to make my way into the dense bushes and go for those big candy caps instead. When Chef arrived, I was still inside of the bushes. I called him out to tell him that candy caps were all around him. For some reason, he was having a hard time seeing them. I made my way out of the dense bush so I could point them out to him. Now, he was seeing them everywhere. He started picking continuously and even joked about hiring some day laborers to pick the mushrooms.

It started to get dark, and we had to stop due to lack of visibility. Note to myself, leave a flashlight and my new headlamp in my car with the rest of mushroom hunting gear. After I got home,  I rinsed the candy caps and put them in my 8-tier dehydrator. For the first time, all the trays were filled with candy caps. Now I have enough candy caps to experiment with recipes other than cookies.