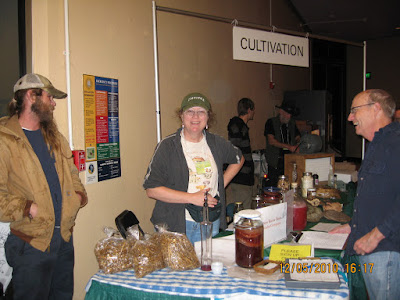 This weekend was the 41st Annual Fungus Fair at Lawrence Hall of Science, UC Berkeley. This is the largest annual public event of Mycological Society of San Francisco. Initially I signed up to do set up on Friday evening; unfortunately, my bronchitis had worsened after the Hearst Castle Road trip. I ended up arriving the fair at 3 PM today. Although it was 2 hours away from closing, people were still coming in. It's becoming more and more exciting each year at the fair as I got to know more people from the society and urban farming community. 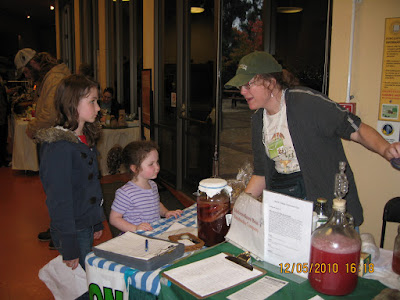 Lisa has spent the entire weekend at her kombucha table in the cultivation area of the fair. People of all ages were fascinated by kombucha and her drinks. She has sold out all of her bottled kombucha at the fair!  The younger girl in the photo above was so excited about the Mother in jar. She called out her sister to check it out with her. They were so adorable as Lisa explained to them what kombucha mother is.


David, the lab instructor for Master Ken's classes, is an artist of painting and felting. I watched him working with his felting needles for the first time. He makes some adorable fuzzy woolly figurines including, of course, little mushrooms. I asked whether I would be able to use Dusty's hair for felting. He thought that was a good idea, and I should collect some Dusty's "wool". Dusty sheds every year, and his fuzzy super soft hair balls roll all over the sun room. I always feel bad that I couldn't put it into some kind of use. 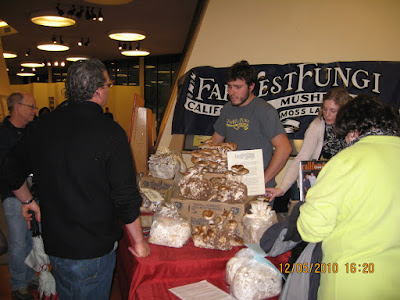 Far West Fungi was at the fair as always, and Kyle Garrone was in charge of the their table this year explaining to people about different mushrooms and their mushroom kits available for sale. There is an excellent article in this month's issue of California Country magazine about Far West Fungi, including a video showing how their mushrooms are cultivated indoors. 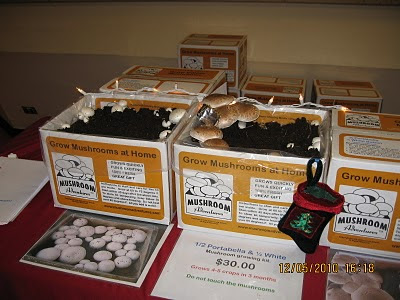 
Every year on the Friday before the fungus fair, many MSSF members go out to collect wild mushrooms in various locations for Fungus Fair display. All the collected mushrooms are labeled and put to display on tables with mushroom experts standing by to answer questions. Fair goers can also bring in their own wild mushrooms to have them identified. In a separate display, the wild mushrooms are arranged to mimic what they would looks like in their natural setting with pine tree or oak logs.

Around 4 P.M., the rain started to pour down. It looked like a heavy rain storm, and that's great for my mushroom blocks on Sand Village Farm. All the volunteers and vendors started to pack up lecture materials, displays, and merchandise. The Fair received some media coverage and raised some money for the Society to have more future events. If you didn't make it to the Fair this year, hopefully we will see you there next year. 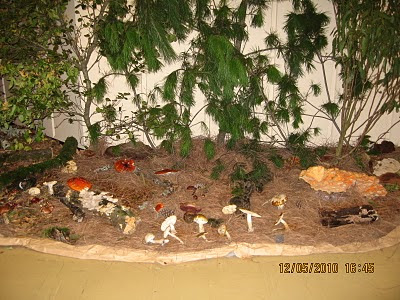