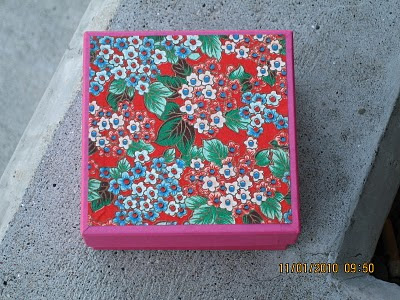 I was pleasantly surprised when I arrived at my cubicle world this morning. My Indian cubicle mate, who taught me the Indian eggplant dish, handed me a brightly colored box. When I opened it, there were two pieces of pastries inside (I ate one before remembering to take a photo). She told me that they were filled with coconuts. I immediately ran upstairs to get a cup of coffee to go with the pastry. The pastry is not greasy at all. I thought they were baked although they looked like they were fried from the blisters on the shell. The coconut flakes inside were moist, spicy, and sugary. After I finished the first piece, I went over to obtain some information about the delicious morsel. 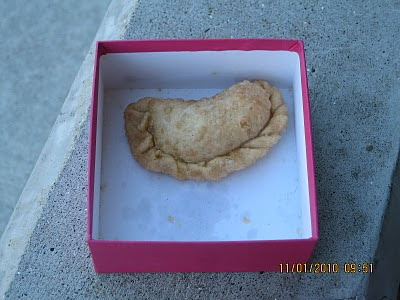 "Was there ginger in the pastry? It's sweet and spicy!" I asked her.

She was surprised to hear the mention of ginger as there was no ginger in the ingredients. There were just coconuts, sugar, jaggery, cardamon, and saffron." Oh, so it was cardamon not ginger that I was tasting. I couldn't believe how off I was. Must be still half asleep.

"What is jaggery?" I asked her. Jaggery (also translated as jaggeree) is a traditional unrefined non-centrifugal sugar in India. It is a concentrated product of cane juice without separation of the molasses and crystals. It's available in Indian grocery stores in blocks. You shave it from the block to use as a sweetener. It sounds great and tastes excellent. I will have to pick some up to experiment with.

I asked her whether the pastries were baked. It turned out they were fried. I was surprised again! She explained to me that the dough was made with all purpose flour mixed with an Indian flour similar to semolina. She went on to explain how the dough was stretched to make it pliable.

After hearing the process and ingredients in details - saffron, shaved jaggery, fresh coconut flakes and pastry made from scratch, I realized this was no ordinary everyday dessert that I just ate! I asked her if this was for a special holiday? Surely enough, the pastry, called Karanji, is for Diwali, which is a five day Hindu festival, often referred to as the Festival of Lights. She admitted it was a lot of work which normally is a community effort in Indian. A group of women would gather and spend a day making Karanji and socialize. She made karanji with a friend during the weekend to celebrate the holiday.

Wow, I feel incredibly special to have the opportunity to taste this authentic homemade Indian treat and learn more about the culture and history behind it. This is one of the reasons I feel fortunately to live in the Bay Area. You can experience world cuisine and culture without having to fly anywhere. 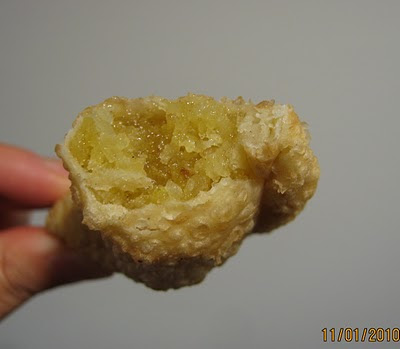