When I went to Far West Fungi last month, I brought back a bunch of recycled mushroom blocks. These are the blocks they use on the farm to cultivate various mushrooms. They are made of saw dust inoculated with mushroom spawns, so the blocks are still full of mycilia even though the mushrooms have been harvested. It is not cost effective for the farm to use the blocks again, so they give them out to educational groups and MSSF members during our field trips.

I have grown mushrooms on recycled blocks before. The first time I got them a few years ago, I had success in growing a lot of them. The second time I brought back a large amount of blocks due to my first success, but the entire batch was contaminated. I didn't get any mushroom to grow during my second attempt. Master Ken gave us some directions on how to get the blocks growing again.

I didn't bother to buy hydrogen peroxide this time since I did that last time, and they all got contaminated anyway.I soaked the blocks in water overnight in the recycling bins and put them inside of the garage. I covered them with large sheets of brown paper to keep the moisture in. I checked on them everyday and sprayed them with water using a spray bottle. When it started raining last week, I took them out in the bins to have them soaked in rain water. I then noticed the shiitake blocks were getting moldy. Bad sign. I took all the moldy ones out and started thinking a different and perhaps better way to store them. 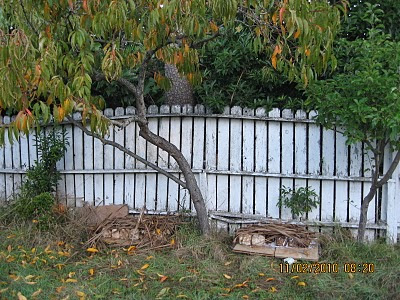 Ideally, I would like to keep them outside so they can get rained on. I also prefer not to have the moldy smell in the garage in the case that they get all moldy again. There isn't a whole lot of shady spots on Sand Village Farm. I have the worm compost bins underneath the Loquat tree. The only other spot is under the peach tree, and I know all the leaves are going to fall off during the winter. Well, it will have to do for now. So I set up two pallets underneath the peach tree, one for oysters and one for shiitake. Ideally you cover them with hay, wood chips, or a burlap bag, but I don't have any of those handy. So I grabbed a bunch of dried palm tree leaves that came from my neighbor's tree and covered the blocks with them. Maybe I could weave these palm leaves? Would this work? I thought it was going to rain more, but I don't see any more rain in the forecast. 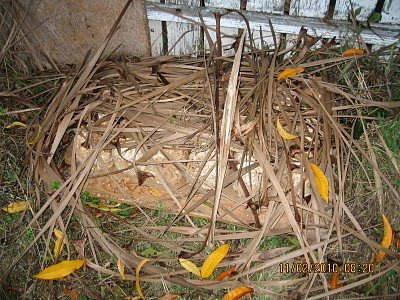 For the last few days, I watered the blocks when I watered the other vegetables. This morning as I was leaving the farm to go to the cubicles, I thought I would peek under the palm leaves. Ha! Baby blue oysters! They are growing! 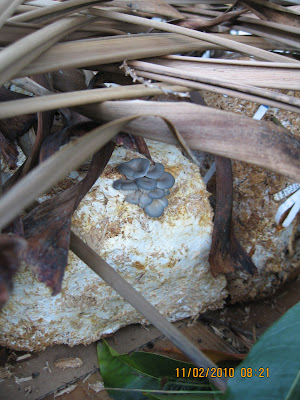