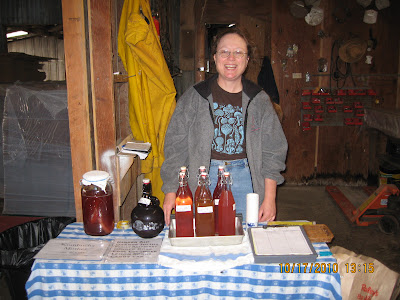 I just learned about Kombucha back in January this year. "Kombucha" was mentioned a lot in Master Ken's class. I looked it up on Wikipedia, and it looked a bit scary to be honest. That thing they call "mother" or "Kombucha mother" in a glass jar is quite alien looking. Some people call it "mushroom." I can tell you that it is NOT a mushroom. It's actually a "Scoby" - Symbiotic Colony of Bacteria and Yeast. Does that sound any better? Not really.

When Lisa, who was in my class, heard that I never had Kombucha tea, she told me that she's been brewing and drinking Kombucha regularly. She said she'd be happy to bring some for me to try. She told me that I could also get them in grocery stores. A few days later, I saw an article about Lindsey Lohan's favorite Kombucha drink, Synergy. My curiosity level was getting higher by the day. Finally, I picked up a bottle of guava flavored Synergy Kombucha for $4 while in San Francisco. It tasted nothing like Guava. It was just pure almost unbearable sourness (and I can take a lot of sour!). I gave up on drinking it after 4 sips.

Lisa and several others brought their Kombucha tea to our Fermentation Club that meets once a month. I was skeptical. I tried Phil's Kombucha, and it was very sour. I tried Jenny's Kombucha, and it was not as sour. It was almost good. I tried Lisa's Kombucha, and I wanted more! It had the perfect balance of sour, sweet, and tangy. It turned out that Phil's Kombucha was brewed too long; hence, it basically turned into vinegar. Jenny's tea was brewed a bit longer than it needed to. Lisa, who's been experimenting longer than others, figured out the small window when the tea is just perfect. She would then pour the tea out from the "Mother" jar so it would not keep fermenting; furthermore, she mixes different herbs and spices, fruit juice, vegetable juice, etc., to create unique flavors.

So why drink Kombucha? Many people in my Fermentation Club strongly believe in the health benefits of Kombucha. Common claims are that Kombucha aids cancer recovery, increases energy, sharpens eyesight, aids joint recovery, improves skin elasticity, and aids digestion. After tasted Lisa's Kombucha, I have been drinking it just because it tastes good. I have never been too crazy for carbonated soda water. Why drink soda? It's bubbly and high in sugar. I don't think anyone can claim any health benefit of soda water. When I drink Lisa's Kombucha, I feel a bit more energetic. And how can you resist these flavors - Ginger Aid, Strawberry Bliss, Sangria Fiesta, Orange Julius, Key Lime Pie, Old Fashioned Root Beer, Grape Soda, Berry Blast, etc., etc. 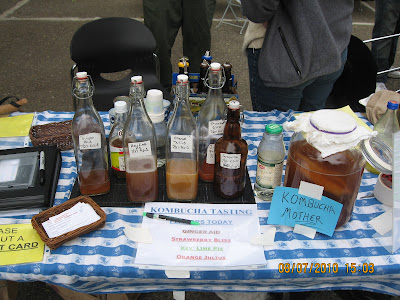 Lisa's been very generous with free tasting of her tea. Her husband, Joe, is just as enthusiastic as she. He makes sure that you get to try every flavor. Master Ken and others have been giving her a lot of feedback on the taste and ideas on what herbs she might be able to try. When Joe announced to everyone that Lisa's Ginger Aid Kombucha won first place at Eat Real contest this year, I couldn't be happier for her! I knew then that I wasn't being biased about how good it is. Lisa of course is too modest to toot her own horn, so I will do that for her.

If you are in the Bay Area and curious about Lisa's Kombucha, send her an email at LisaLeonard1@ymail.com to get on her email list for updates. Give something new a try, you may be in for a surprisingly pleasant experience.
Posted by Catalina at 11:08 AM