A Day of Wildlife Sightings

Today marked the first day of full rain for the mushroom season. We stayed inside for most of the class time since it will take 7-10 days for "good edibles" to grow and pop out of the ground. Around 2 P.M. we got the news that a couple young deer have wandered into the herb garden through an unclosed gate. Master Ken immediately asked the class whether anyone wanted venison as a joke. Gotta love his Texan humor. We got the task of chasing out the deer. Don't worry, there are plenty of other vegetation they can eat around the campus. We just can't have them eat up what the students have grown for their classes. After the class, a group of us put on our rain gear and went to searching for the deer. I spotted them along with a couple other guys. I even managed to snap a photo in the misty weather. They ran out of the horticulture garden soon after. This wasn't the first time we have seen deer inside of the herb garden. They always run away as fast as they can from people. I don't understand why that Oakland Police thought that young deer was a threat and had to shoot it numerous times.

As I got back to my neighborhood driving down Central Avenue, I was surprised of what I saw on the street. Well, I was pretty sure that I saw turkeys. I pulled over, parked the car, and went looking for the turkeys with my camera. They were huge! Several cars slowed down when they saw the huge turkeys taking a walk just a block from El Cerrito Plaza. I wonder where they were going and what were going to happen to them.


After the turkey encounter, I went home and started rearranging the mushroom blocks I got from Far West Fungi. Some of the shiitake blocks got moldy because I didn't have the time during the week to properly store them. The oyster mushroom blocks look pretty good so far with good potential. I spotted this newt(?) as I lifted up a piece of cardboard that was covering the spot where the juniper used to be.

These caterpillars are regulars on fennel. 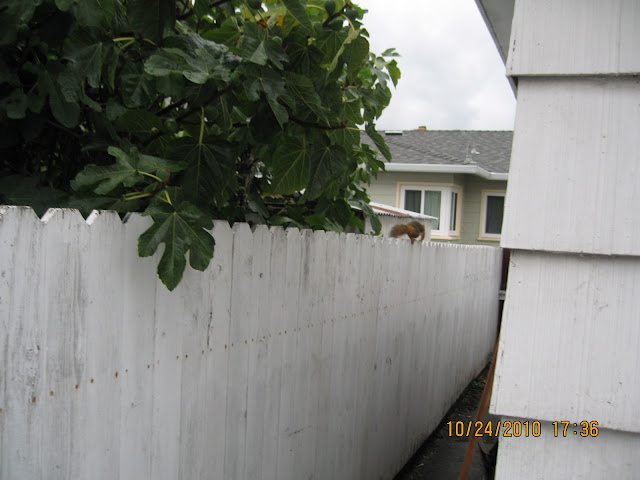 The squirrel came back for more figs. I was able to get a few pictures of him.