Some of My Favorite Bottled Drinks


I just spotted this article, My not drinking bothers friends, on CNN.com. I can certainly relate. While most of my friends who I have known for years are not bothered by it, I am constantly telling new friends that I don't drink any alcohol because they kept forgetting and wanted to pour me some mead or sake. Work celebration gatherings are a bit awkward. When they bring out the champagne for everyone to celebrate the completion of a project or software release, I have to decline and ask for water or lemonade.

People often ask me, "You never drink?" or "You don't drink at all? Not even wine? in disbelief. "Why?" is often the followup question.

Depending on the person and the situation. Sometimes I tell them the number one reason I don't drink alcohol. It simply tastes nasty to me. They say, oh, that's because you didn't have the good stuff. The truth is, it's the taste of alcohol that's nasty. Beer is bitter. I don't drinking bitter liquid or eating bitter vegetables. Bitter melon? No, thanks. Sometimes I tell them that I am allergic to it. They will then give me the "poor you" look or tell me, "Awww, poor you." Honestly, I much prefer drinking cold whole milk instead of any alcoholic beverage. I like whole milk and and not the 2% white water. I don't like soda (pop) all that much either. It's too carbonated.


I have my own line of "exotic" drinks. Sometimes I'll bring one of these bottles to a social gathering. I grew up with Calpico. Back then, it only came in white, which is the original flavor. Now they have 5 flavors to choose from.


Yup, the same Japanese company that sells Kirin beer also sells tea. Kirin milk tea is my favorite but they also have black tea and sweetened tea without milk. 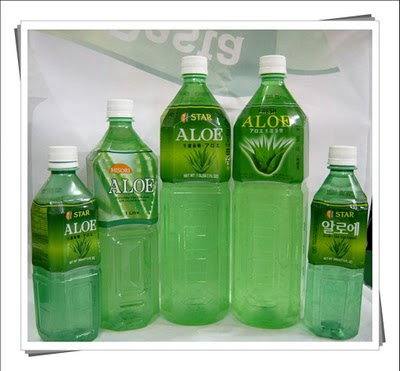 Korean aloe vera drinks are awesome. I tried the unsweetened stuff from Trader Joe's once, and it was so nasty. I had to dump most of it under the peach tree. I have a huge cluster of aloe in the back of the farm. I made my own aloe drink once sweetened with honey. It was actually pretty good but very time consuming.


I just discovered Korean rice drink recently in large bottles. I call this Korean horchata. I had my Mexican friend try it, and she liked it, too. The taste is different fron horchata though. Korean rice drink uses brown rice and there is no cinnamon.
Posted by Catalina at 9:20 AM

Email ThisBlogThis!Share to TwitterShare to FacebookShare to Pinterest
Labels: drinks