Japanese cucumbers can be found in Asian grocery stores. I planted a bunch of them earlier this year, but most of the young plants were consumed by pill bugs. I ended up with only one surviving plant, and I was able to harvest a few cucumbers to make the pickles. This is the kind of pickle similar to what you get in Japanese or Korean restaurants as an appetizer or garnish.

You can make the pickles by cutting them into chunks or slice them thin. I decided to make a jar of thinly sliced pickles. 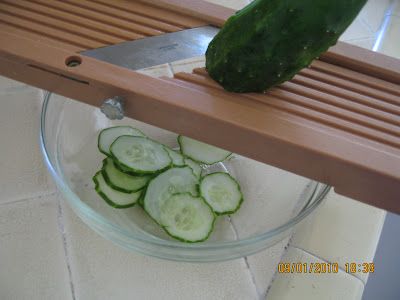 After you are done slicing them in a non-reactive bowl, such as glass or ceramic, put some salt over the cucumber and mix them together. The salt will make the bitterness sweat out from the cucumbers. Put the sliced cucumbers mixed with salt in the fridge for at least an hour. I left mine in there for over 5 hours.

When you take the bowl out, you will see liquid in there. Dump the bitter salty water out and rinse the cucumber slices with water. I sliced some lemon to put them on the side of my pickle jar before transferring the cucumber slices into the jar. You can stick the lemon slices in there later if that's easier. After all the sliced cucumbers are piled up in the jar, I fill the jar with some Japanese rice vinegar, a little sugar, salt, lemon juice, chili flakes, and water. You can adjust any of these seasonings to your taste. I like my pickles a little sweet, so I put in 1 table spoon of sugar. I put in just enough rice vinegar to fill about half way then add water to cover the cucumbers. Make sure that you leave room on top as the cucumbers may produce more liquid. After you are done assembling the pickle jar, put it back in the fridge overnight.

I tried a slice of pickled cucumbers this morning. So refreshing! 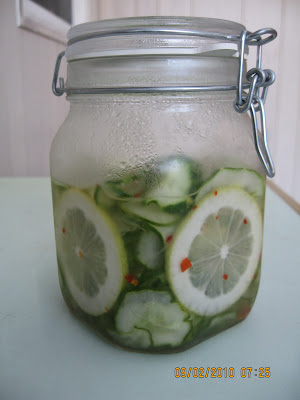