Jack and the Bean Stalk 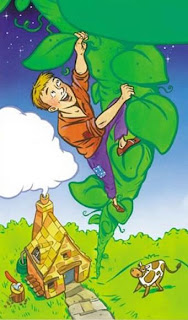 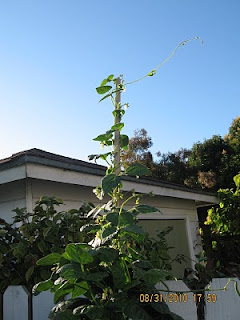 I tried something new this year with the beans. Instead of starting the seeds indoors in small six-packs, I just stuck a bunch of seeds in a wine barrel planter on the farm. I watched the beans grow taller and taller over the last 4 months. It's fascinating. Every time I water it, I think of Jack and the Bean Stalk. It's an English fairy tale, closely associated with the tale of Jack the Giant-killer. It is known under a number of versions. Benjamin Tabart's moralized version of 1807 is the first appearance in print, but "Felix Summerly" (Henry Cole) popularized it in The Home Treasury (1842), and Joseph Jacobs rewrote it in English Fairy Tales (1890). Jacobs's version is most commonly reprinted today and is believed to more closely adhere to the oral versions than Tabart's, because it lacks the moralizing of that version. (courtesy of Wikipedia)